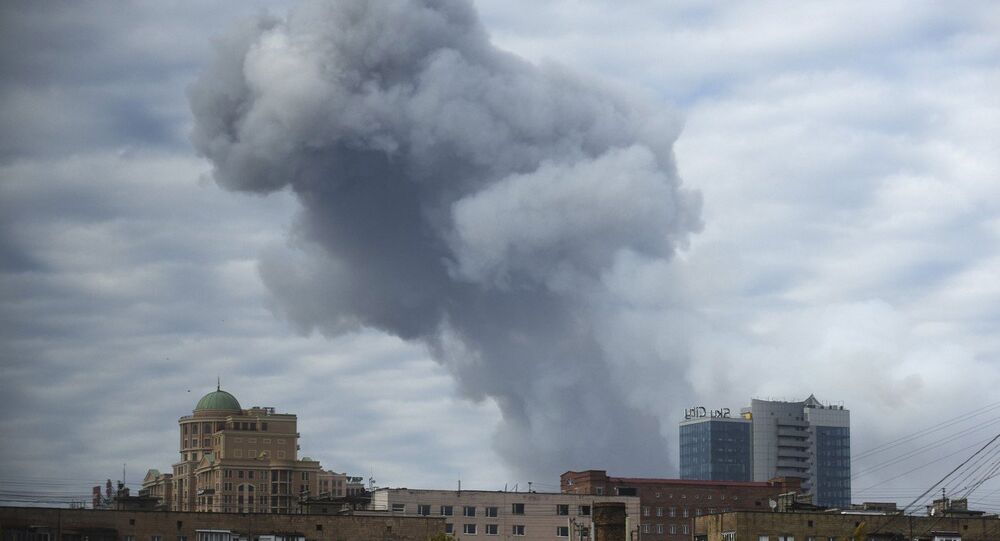 According to the acting Ukrainian Defense Ministry's spokesman, it was ordered not to open fire under any circumstances, except for a direct order from a commander.

“It was ordered not to open fire starting from 8 a.m. under any circumstances, except for a direct order from the commander. A mortar shell was fired at 9.15 in the Luhansk region, and we are trying to find out who did this. There have been no escalation so far,” he said.

The incident occurred just hours after the start the "day of silence", an initiative announced last week by Ukrainian President Petro Poroshenko in a bid to kick-start the so-called "silence regime" along the line of contact with militia-controlled areas in Ukraine's southeast. Poroshenko said the step was a renewed effort to implement a ceasefire between the opposing parties. Both sides have previously agreed to lay down their arms.

© AP Photo / Efrem Lukatsky
Ceasefire With East Ukraine in Effect : Special Operations Press Center
Months of bloodshed and a surging death toll among civilians in southeastern Ukraine prompted the warring parties to agree a ceasefire on September 5 at talks in Belarus with the mediation of representatives from Russia and the Organization for Security and Co-operation in Europe (OSCE). Another meeting on September 19 set the provisions for the ceasefire's implementation.

Despite the truce, both warring parties have repeatedly accused each other of ceasefire violations.

© REUTERS / Marko Djurica
DPR Independence Supporters Preparing for Prisoner Exchange With Kiev
Kiev government envoys have informed representatives of the self-proclaimed people’s republics in eastern Ukraine that they are ready for a prisoner exchange under the all-for-all scheme, an acting spokesman for the Ukrainian Defense Ministry said Tuesday.

“There were talks and statements on the prisoner swap issue yesterday. Our side said it was ready to swap all for all. The date has not been discussed so far,” Valentyn Buriachenko said.

Earlier on Tuesday, Denis Pushilin, Deputy Chair of the Donetsk People’s Republic (DPR) Parliament, stated that the sides are preparing a large prisoner exchange and plan to discuss the details on Wednesday.

“We are preparing a large prisoner exchange and the dates will be discussed tomorrow during a Skype conference and during the conference in Minsk,” Pushilin said.

“The Ukrainian side has already presented a list of 223 individuals, and from our side there are 152,” he added.