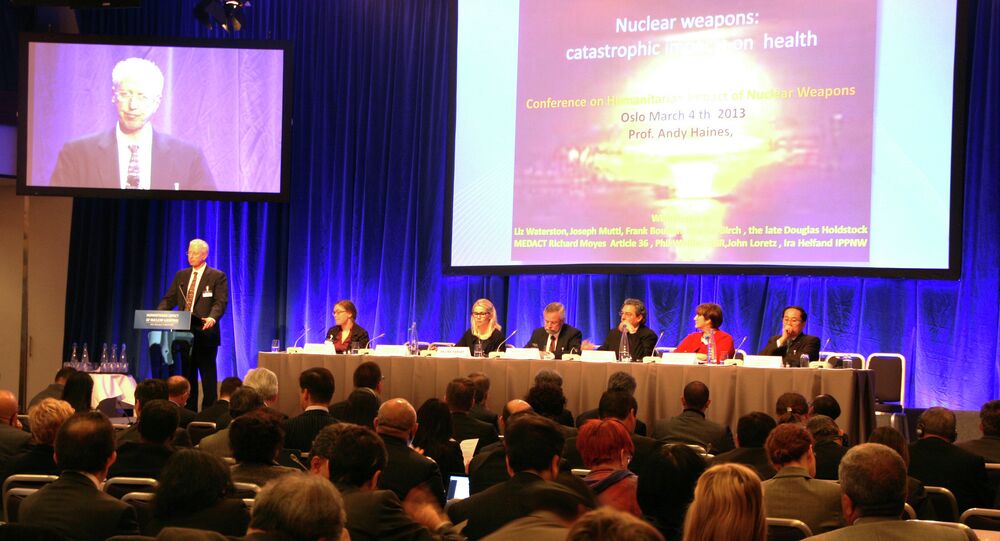 Conference on Humanitarian Impact of Nuclear Weapons Kicks Off in Vienna

Austrian Foreign Minister Sebastian Kurz stated at the opening of the third Сonference on the Humanitarian Impact of Nuclear Weapons that as long as nuclear weapons exist, the risk of their use on purpose or accidentally also exists.

© Sputnik / Sergei Subbotin
Vienna Conference to Discuss Humanitarian Consequences of Nuclear Weapons
VIENNA, December 8 (Sputnik) — The third Сonference on the Humanitarian Impact of Nuclear Weapons, with the goals of highlighting the disastrous impact of nuclear weapons on humanity and the planet, as well as the lack of progress in nuclear weapons disarmament, opened in the Austrian capital on Monday

"As long as the nuclear weapons exits, the risk of their use on purpose or accidentally exists, too," Austrian Foreign Minister Sebastian Kurz said in his opening remarks.

He stressed that nuclear weapons have become an abstract concept since the Cold War ended, yet the risk of its use persists as the international community has stalled the process of nuclear disarmament.

"After the Cold War, most people stopped worrying about nuclear weapons. But this is fundamentally wrong," Kurz said.

© Flickr / Mickey
World Community Should Cooperate on Eliminating Nuclear Weapons: Expert
According to the Austrian foreign minister, nuclear arms must be completely eliminated due to the risks of human error and cybercrime.

"It is now high time to move from the words to real action," Kurz said, expressing hope that the conference in Vienna will become a stepping stone toward a world without nuclear weapons.

Peter Maurer, the president of the International Committee of the Red Cross (ICRC), also pointed out that potential risks associated with the use of nuclear weapons, such as misinterpreted data and false alarms could lead to a nuclear disaster.

Maurer said that there has been a shift in nuclear discussions, with their focus shifting from strategic to humanitarian issues.

"After decades of focusing on nuclear weapons primarily in technical, military progress … states have finally engaged in a discussion, what it means for people and the environment," the ICRC head said.

According to the conference's organization committee, over 16,000 nuclear warheads still exist, with many of them put on high alert. The event, scheduled for December 8-9 in Vienna's Hofburg Palace, is aimed at promoting nuclear disarmament and nonproliferation.