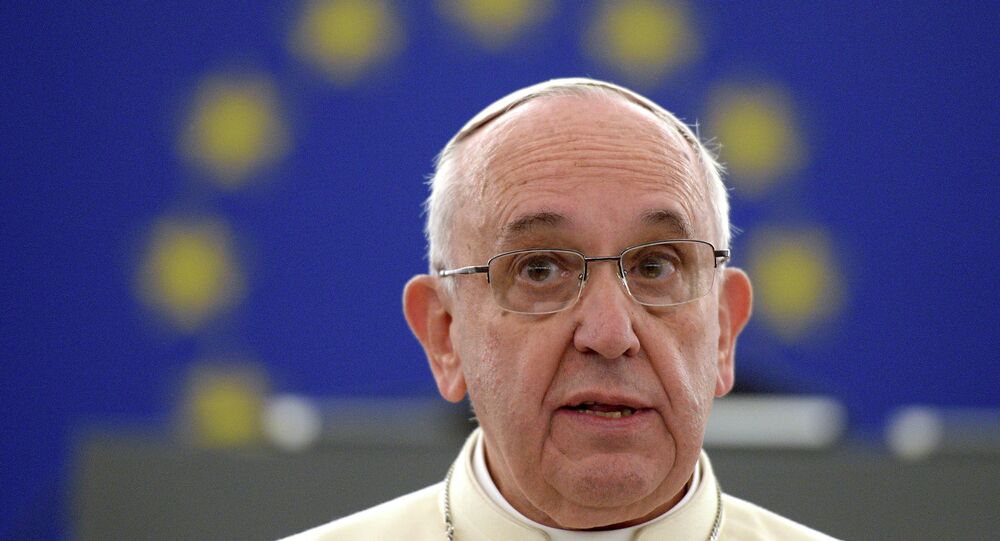 The Roman Catholic Church's Pope Francis has released a video message urging spiritual resistance and expressing solidarity with Iraqi Christians and other minorities who had been driven out of Iraq earlier this year by the Islamic State militant group.

MOSCOW, December 7 (Sputnik) — Pope Francis released a video message expressing solidarity with Iraqi Christians and other minorities who had been forced to flee areas of Iraq earlier this year by Islamist State militants, Agence France-Presse reported.

“When I returned from my visit to Turkey, I said that Christians are being driven out of the Middle East and undergoing great suffering,” Francis said, referring to his visit to Turkey last weekend, where he met with Ecumenical Patriarch Bartholomew I.

The pontiff stated that “due to an extremist fundamentalist group, entire communities,” including “Christians and Yazidis, suffered, and still suffer, inhuman violence because of their ethnic [and] religious identity.”

“I think of the wounds, the pain of the mothers with their children, the elderly and displaced persons, the wounds of those who are victims of any kind of violence,” the pontiff noted.

The pope noted that not just people, but also their “sacred buildings, monuments, religious symbols and cultural heritage” have been attacked, as if in an attempt “to erase every trace, every memory” of their presence and their history in the region.

The pope said that the refugees are “very close” to his heart “during these difficult times,” thanking them “for the witness you are giving,” and telling them that their struggle is met with the “concern and love of the entire Church.”

Francis noted that the Middle East’s Christian community has “the strength to carry forth your faith, which is a testimony to us.” He said that he would pray for them, for their “strength and resistance,” adding that while IS jihadis may “not want the presence of Christians in these places,” the Christian community will not stop “giving witness to Christ.”

The pontiff put up the message via Twitter on Saturday; French Cardinal Philippe Barbarin is making a two-day visit to Erbil in Iraq’s Kurdish north, where thousands of refugees have been living since their expulsion from Mosul.

Last week, the final communique of a conference organized by Al-Azhar, Sunni Islam’s most prestigious center of learning, urged Christians in the Middle East to “stay rooted in their homelands and to weather this wave of terrorism we are all suffering,” Agence France-Presse noted.

Pope Francis to Arrive in Turkey for Three-Day Visit: Reports

EU Should Not Allow Mediterranean to Become Cemetery for Immigrants: Pope