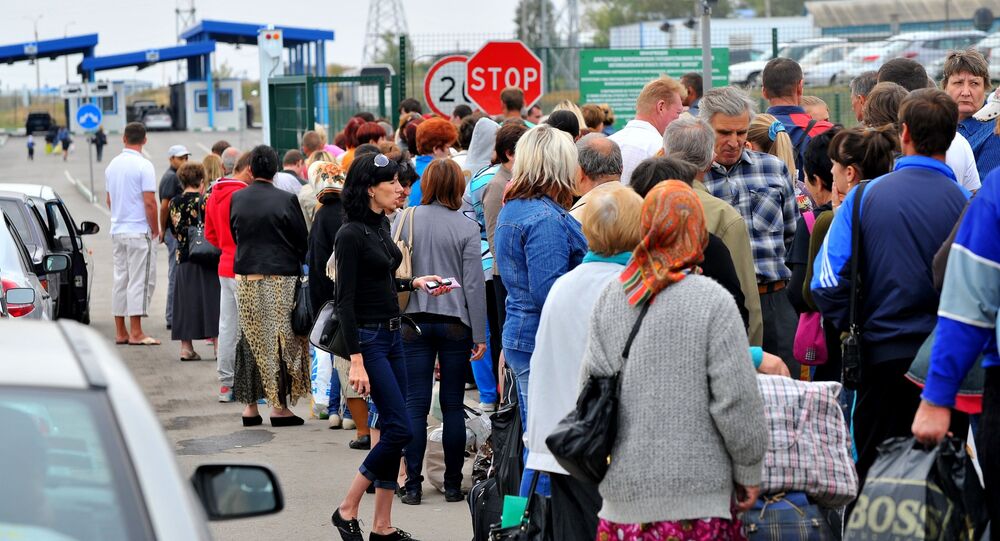 UN refugee agency UNHCR reported that fighting in eastern Ukraine has resulted in over half a million people becoming internally displaced, while hundreds of thousands have fled to Russia and other neighbouring countries.

© Sputnik / Valery Melnikov
Over 39,000 Ukrainian Refugees Remain in Russia: Emergencies Ministry
NEW YORK, December 5 (Sputnik) – The number of Ukrainians who have been displaced by fighting in the country has reached 514,000, while 233,000 others have sought refugee status or asylum in Russia, the UN refugee agency UNHCR said in a statement on Friday.

"Fighting in eastern Ukraine this year has resulted in over half a million people becoming internally displaced, while hundreds of thousands have fled to Russia and other neighbouring countries," UNHCR said in a statement emailed to journalists.

"In Ukraine, most internally-displaced persons remain in regions close to the conflict, including the eastern city of Kharkiv (118,000) and government-controlled territories in Donetsk (76,000) and Luhansk (30,000), as well as in the Zaporizhzhia (51,000) and Dnipropetrovsk (48,000) regions," the statement added.

© RIA Novosti . Alexei Malgavko
UNHCR Says Not Planning Its Own Probe Into Reports on Ukrainian Refugees
Most of the displaced people fall into vulnerable groups, the UNHCR said. Some 27 percent are children, 21 percent are elderly or disabled, and women, which make up 65 percent of the adults who have been forced to flee from their homes.

Following the February coup in Kiev, residents of the Donetsk and Luhansk regions in eastern Ukraine established people's republics that later declared their independence. The Ukrainian crisis escalated in mid-April, when Kiev launched a military offensive against the independence supporters.

The conflicting sides agreed on a ceasefire on September 5 at a meeting of the trilateral Contact Group on Ukraine in Belarusian capital Minsk and signed a memorandum specifying the ceasefire's implementation on September 19. However, both sides have subsequently accused each other of violating the truce.