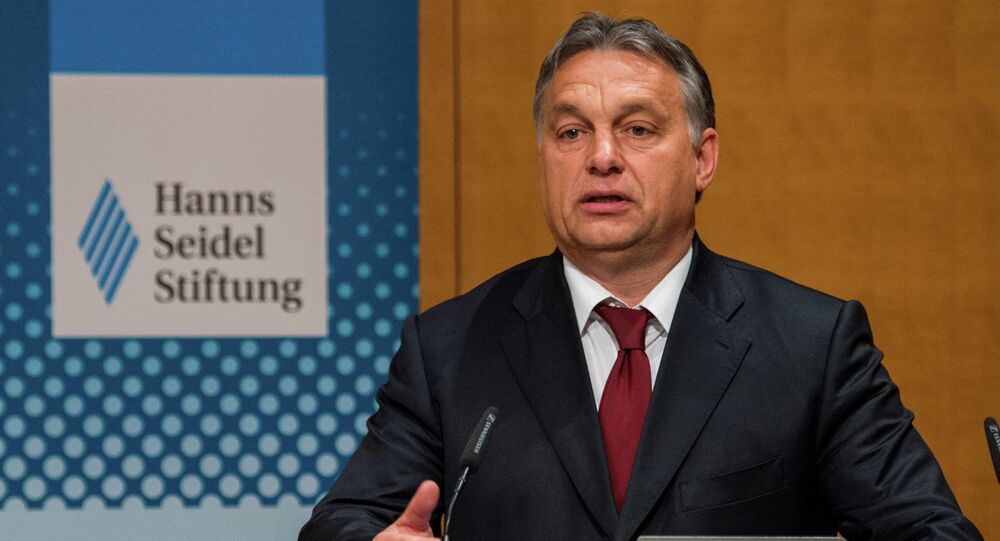 "The EU has worked ceaselessly to undermine this program," Viktor Orban said in an interview with public radio MR1 on Friday.

He also warned the nation on Friday sovereignty of Hungary was under attack, Hungarian online journal Portfolio.hu reported.

In his biweekly interview with MR1 radio station, Orban said a country could be independent financially, in terms of trade freedom and energy security. Hungary had high hopes for the South Stream project that would secure energy supplies from Russia by circumventing Ukraine.

© Sputnik / Ilya Pitalev
Gazprom Plans to Build New Black Sea Gas Pipeline to Turkey: CEO
But in a surprise decision, Russian President Vladimir Putin scrapped the $40-billion project to bring gas to central and southern Europe under the Black Sea, prompting the Orban administration to lash out at Brussels over its pressure on the prospective transit countries to drop South Stream.

According to Portfolio.hu, this was not the first instance of the European Union trying to put controls on Hungary. Budapest had already been in debates with EU institutions over different initiatives, such as its utility tariff reductions, which are contested by Brussels.

Orban also referred to a recent row with the United States over US Sen. John McCain's controversial remark in which he likened the Hungarian prime minister to "a neo-fascist dictator". This caused Hungary's Foreign Minister Peter Szijjarto to summon US charge d'affaires Andre Goodfriend on Wednesday.

Relations between Budapest and Washington have soured recently after the United States handed out visa bans to six Hungarian government officials over alleged corruption.

Orban's warning came amid accusations from Western-backed opposition that the Hungarian government was cozying up to Russia at a time when EU and US trust for Moscow was at its lowest due to the Ukraine crisis.

Moscow has cancelled the South Stream project, which was developed in order to provide European consumers with Russian natural gas across the Black Sea, amid to the stiff opposition from the EU.

For a long time, Viktor Orban has been supporting the lucrative deal with Russia, withstanding fierce criticism from his European counterparts in the process, and refusing to join the EU anti-Russian sanctions policy.

The cancellation of the $40 billion South Stream project has dealt a heavy blow to European natural gas users. Although it will not affect Orban's "grip on power" it has become a disappointment for the 51-year-old politician.

On December 1, Russian President Vladimir Putin announced that Russia was unable to continue with the South Stream gas pipeline project under the current conditions. The president cited the European Commission's position on the project and Bulgaria's failure to grant permission to proceed with the pipeline's construction as the major reasons behind the decision.