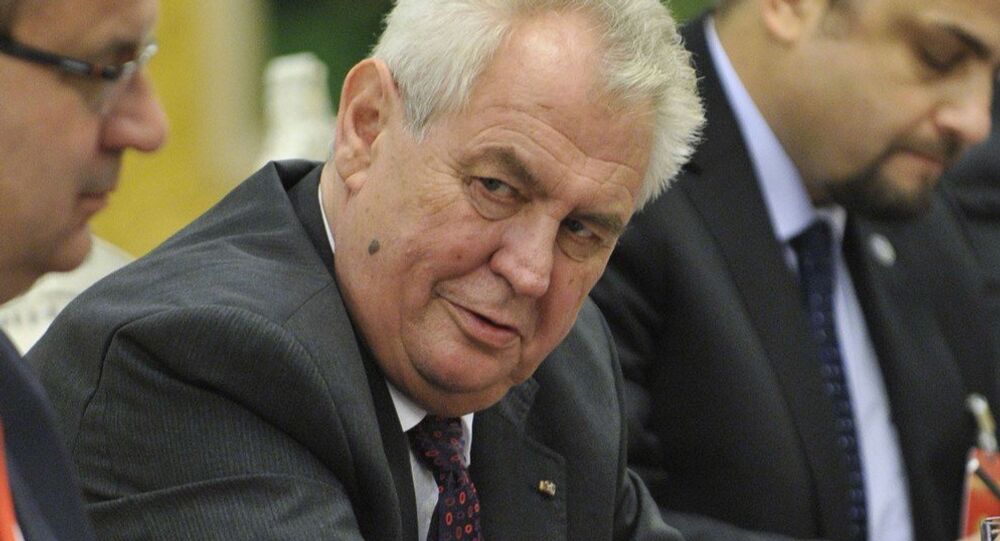 © AP Photo / Sergei Chuzavkov
Czech President in Popularity Nose-Dive: Poll
PRAGUE, November 28 (Sputnik) – President of the Czech Republic Milos Zeman could be banned from speaking live on the radio due to his recent use of swearwords on air, a spokesperson for Czech Radio told RIA Novosti Friday.

"Czech Radio chiefs are going to address the issue of the format of traditional interviews with the country's president 'Talks from Lany' [the countryside residence of the Czech president], with the possibility of changing it to a prerecorded interview," Jiri Hosna said.

According to Hosna, the move is linked to a recent decision by the Czech Radio Council saying that both the law on TV and radio broadcasting and the Czech Radio Code were violated when Zeman used foul language live.

During a November 2 interview with Radio Praha, the president used swearwords while translating the name of the Russian band Pussy Riot. He also characterized Pussy Riot as "regular thugs, linked to pornography." A number of Czech political figures, the country's prime minister and former finance minister have condemned Zeman's behavior.

Czech Radio may still keep the format of the show, as it is very popular with listeners. Peter Duhan, the director general of Czech Radio, asked president Zeman for a meeting to discuss the issue.

Live radio shows from the Lany residence have been an eight-decade-old tradition started by Czechoslovakia's first president Tomas Masaryk. President Zeman's predecessor Vaclav Klaus did not take part in the show.