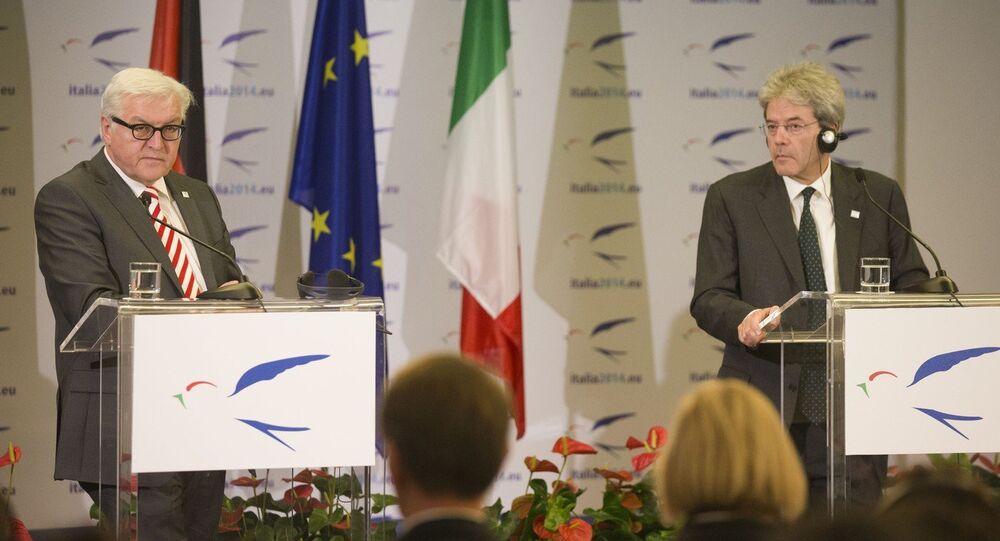 In a joint statement the Foreign Ministers of Italy and Germany outlined initial measures that need to be taken to deal with the North Africa migration crisis.

© AP Photo
Criminals Transferring Illegal Migrants to Europe Uncovered in Spain
MOSCOW, November 28 (Sputnik) — Italy and Germany agreed on comprehensive and collaborative strategies beyond the ordinary policing of borders in dealing with the North Africa migration crisis, the Foreign Ministers of the two countries said in a joint statement Friday.

Africa is one of the main departure points of migrants trying to enter Europe via the Mediterranean Sea, with an estimated 165,000 migrants embarking on the journey as of October 2014, according to United Nations records.

The ministers said that the structural causes of migration flows needed to be addressed, as well as the human rights violations and humanitarian emergencies experienced by the migrants during their journey and at the host country.

"As an initial measure, we will intensify our diplomatic efforts in this region in support of political stability. Efforts that include mediation in conflict resolution," the statement read, adding that the only solution was a long-term relationship with the migrants" countries of origin.

© AP Photo / Gregorio Borgia, File
At Least 12 Injured in Rome Following Protests Against Illegal Migrants
Other measures outlined in the statement include improving the conditions and quality of services offered to migrants in the host countries, as well as in and around refugee camps.

The commentary came following the 4th Euro-African Ministerial Conference on Migration and Development which took place in Rome on Thursday, attended by the interior ministers of 58 European and African countries.

The conference comes in light of several recent operations to rescue drowning migrants trying to cross the Mediterranean.