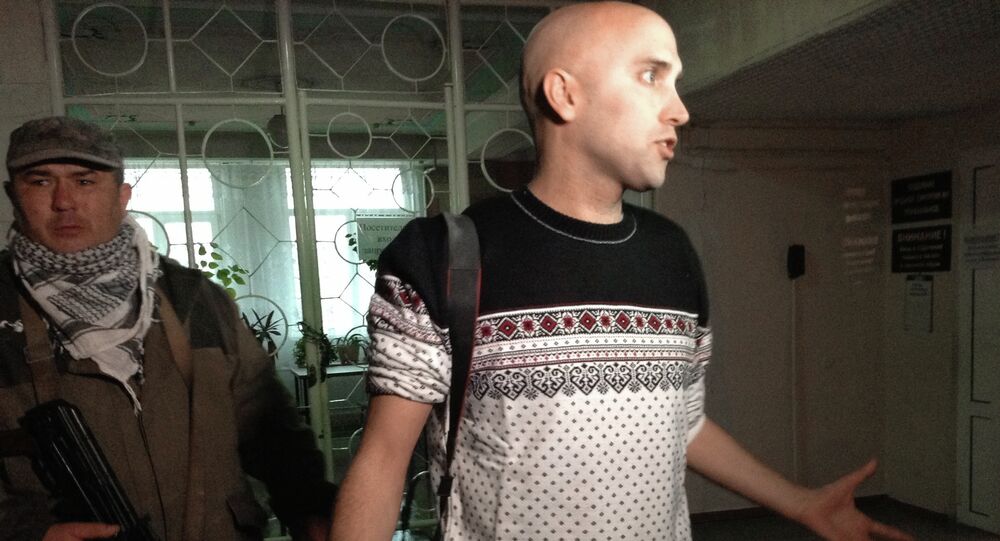 British journalist Graham Phillips sustained minor injuries when he came under the fire near the Ukrainian village of Peski.

Earlier it was reported that Phillips was injured near the Ukrainian village of Peski while covering clashes from the side of the independence supporters.

“The injury is a blunt fragmentation one, soft tissues of the lumbar region are affected,” Rogovoy said.

Phillips told journalists that the incident happened on Monday at noon. Local militia fighters who were nearby said Phillips was hurt by a fragment from a 82-mm mine that Ukrainian forces threw at them.

Graham Phillips: Kiev Actions Alienated People in Donbass
Peski is located in Ukraine’s east and has been under heavy bombardment by the country’s army.

Phillips, who was working for Russia's Zvezda television channel and contributed reports to the RT television channel, has been detained twice by the Ukrainian State Security Service while working in the conflict zone.

On May 20, the journalist was detained by the Ukrainian National Guard as he was heading to Slaviansk. According to the reports, he was accused of espionage favoring independence supporters. Phillips was released two days later.

On July 22, Graham Phillips disappeared as he was filming massive fighting near Donetsk airport. He was released within two days. The Ukrainian State Security Service expelled the journalist and banned him from entering Ukraine for three years, according to the reports. However, Phillips said he did not receive any notice of his ban from the country.