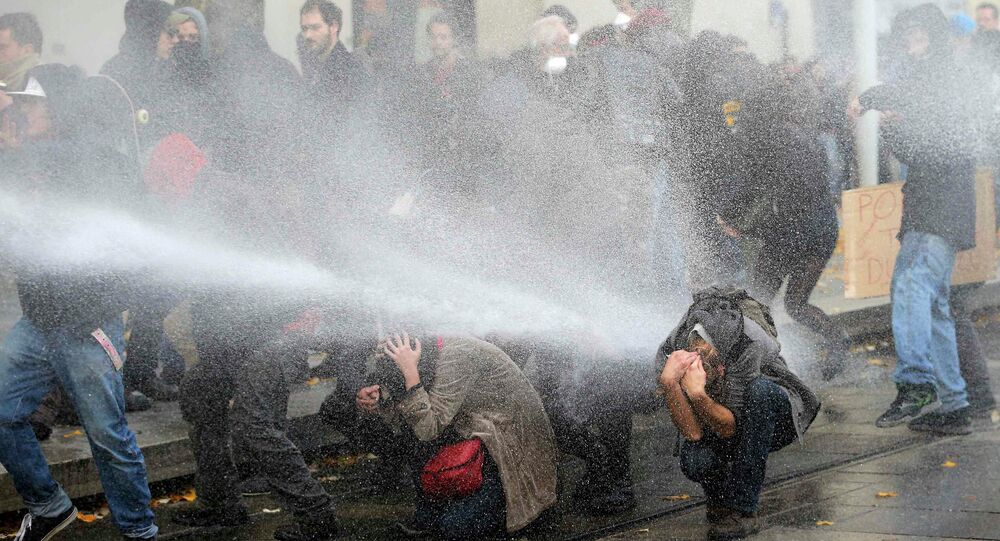 Between 600 and 1,000 people gathered to protest against police brutality in Toulouse, France. What initially started as a peaceful march soon turned violent, with police using water cannons to disperse the crowd.

MOSCOW, November 23 (Sputnik) – Protesters clashed with authorities in Toulouse, France on Saturday, during demonstrations against police brutality in response to the death of a young eco-activist last month, the Guardian said.

The crowd gathered to protest against police brutality in response to the death of 21-year old Remi Fraisse, who was killed by French police on October 26. What initially started as a peaceful march soon turned violent, as protesters started to set garbage containers on fire and smash bus stops, the Guardian reported.

Fraisse was killed by a police grenade on October 26, when a group of activists came to protest against construction of a dam near Toulouse. Last month’s incident sparked a series of protests against the French government and police brutality. Nearly 70 protests have taken place all across the country in November, RT informed.

Between 600 and 1,000 protesters took to the streets of Toulouse and around 1,200 protested in Nantes, the western part of France, on Saturday, the Irish Times said.

The death of Fraisse has further weakened already sour relations between President Francois Hollande’s  government and the Green Party, which in the past had partnered up to form a government. The Green Party has accused the government of not properly reacting to the activist’s death, Reuters said.