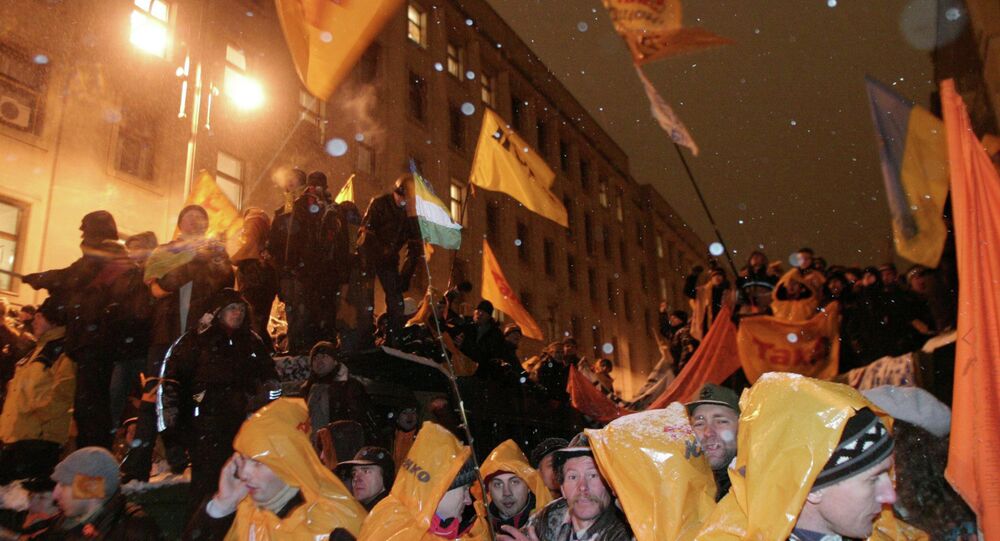 22 November Is Anniversary of Orange Revolution in Ukraine

MOSCOW, November 22 (Sputnik) — The Orange Revolution was a campaign of protests, rallies, pickets, strikes and other acts of civil disobedience that were organized by the supporters of Viktor Yushchenko, an opposition candidate at the 2004 Ukrainian presidential elections.

Yushchenko's supporters labelled the election results as rigged. The opposition leaders declared a "non-violent struggle" for the recognition of Yushchenko's victory.

Before the official election results were announced, Yushchenko's supporters had begun to put up tents on Kiev's main avenue — Khreshchatyk.

On November 23, following the adjournment of the Verkhovna Rada's plenary session, presidential hopeful Viktor Yushchenko took the stand and swore an oath of allegiance to the Ukrainian people using the Bible.

On November 24, Yushchenko addressed Maidan, calling for a nation-wide strike.

In the days to follow, rallies in support of the opposition candidate started to be staged in the cities of western and central Ukraine as well as in Kiev and some regional centers. Protests in support of Yushchenko were also held in some European cities.

In Kiev, the supporters of presidential candidate Viktor Yushchenko blocked the work of the presidential administration, the government and other executive bodies. A similar situation developed in other regions as well.

Opposition supporters united under the symbol of the orange color that was fastened to clothes and accessories.

Mass rallies in support of Yanukovych were held in Ukraine's south and east. The authorities in Ukraine's eastern region of Donetsk said they were ready to hold a referendum on the status of the region in the case of a coup.

In the early hours of November 27, Viktor Yushchenko, addressing a mass rally organized in Kiev by the Ukrainian opposition, declared that the only way out of the political crisis was a new vote. He proposed holding a repeat election on December 12, noting that the "election should be held without absentee voter certificates and under the new Central Election Board."

On November 27, 2004, Ukraine's Verkhovna Rada recognized the results of the presidential runoff as invalid.

On December 3, 2004, the Supreme Court ruled void the results of the second round of presidential elections on November 21 and set the date for a repeat vote, which was to be held on December 26. A group of international mediators that included Lithuanian President Valdas Adamkus, Polish President Aleksander Kwasniewski, EU official Javier Solana, OSCE Secretary General Jan Kubis and State Duma Speaker Boris Gryzlov were drawn in to help settle the political crisis.

On December 7, an agreement was reached during the talks between Ukrainian President Leonid Kuchma, Verkhovna Rada Speaker Volodymyr Litvin and presidential candidates Viktor Yanukovych and Viktor Yushchenko, with the participation of international mediators, that the ruling of the Supreme Court should be upheld by all the participants of the election process. The talks saw another agreement being reached true to which Ukraine's President was to cancel the authority of the members of the Central Election Board and submit the new list of candidates for the Central Election Board to the Verkhovna Rada. The participants also agreed in the course of the talks that the blockade of the cabinet and the presidential administration buildings was to be removed.

On December 8, 2004, the former members of the Central Election Board resigned upon demands by the opposition, with the Verkhovna Rada approving a new Election Board made up of 15 members. The Ukrainian president signed a law on amendments to the Constitution granting more powers to the Verkhovna Rada at the expense of President's functions, as well as a law on amending the law on presidential elections.

On January 10, 2005, Ukraine's Central Election Board declared Viktor Yushchenko winner of the presidential election, with 51.99 percent of the vote against Viktor Yanukovych's 44.2 percent.

Viktor Yushchenko was sworn in as President on January 23, and by January 25 the tent camps had already been removed from Kiev's center.

Top Ten Important Events in Ukraine Over Past Ten Years

17 Significant Moments of the Euromaidan

One Year Since Beginning of Euromaidan Protests in Ukraine