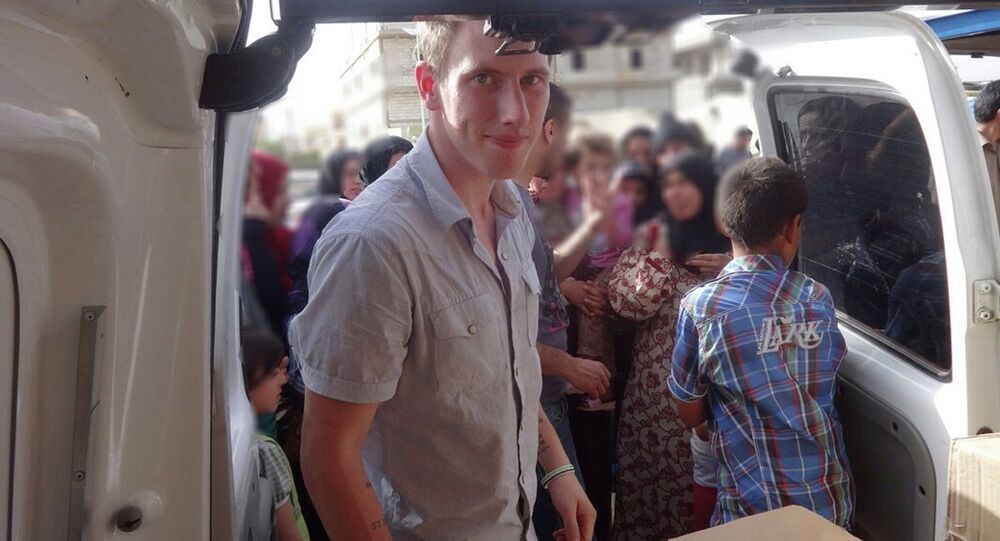 British Student Possibly Among IS Executioners of US Hostage: Reports

Reports of a British medical student possibly present during the execution of US aid worker Peter Kassig have already been submitted to the Foreign and Commonwealth Office and are being investigated.

MOSCOW, November 17 (Sputnik) — A British student may be among the Islamic State (IS) militants in the video showing the execution of US aid worker Peter Kassig, The Guardian reported Monday.

The father of 20-year-old Nasser Muthana, a Briton who quit studies at a medical school in Cardiff to move to Syria, told The Guardian that one of the men in the video looked like his son, though he was not exactly sure.

"It looks like him. I can't be certain because of the quality of the picture and you can never be sure. But it could be him," Ahmed Muthana said in the interview.

"I am like any other father. I am trying not to believe it is my boy but it looks like him," he added. "What they [Islamic State] are doing is inhuman, this is not the son I brought up," Ahmed Muthana continued saying that if it were his son, he must have been "mentally ill".

According to a representative of South Wales police quoted by the Guardian, the reports are being investigated and have already been submitted to the Foreign and Commonwealth Office.

Ahmed Muthana arrived in Britain in the 1950s from Yemen. Nasser Muthana and his younger brother both left Britain to travel to Syria. In June, Nasser appeared in a propaganda video launched by the Islamic State to recruit potential jihadists to fight in Iraq and Syria.

Earlier on Monday French media reported that two French citizens could have been among the militants participating in the execution of Kassig. The identity of one of them – Maxime Hauchard – has already been established.

On Sunday, the IS militant group claimed to have beheaded Kassig and released a video showing the aftermath of the killing, as well as the beheading of several Syrian men.

Kassig, a Muslim convert who worked for a relief organization he founded to aid Syrian refugees, Special Emergency Response and Assistance (SERA), was abducted in eastern Syria in October 2013.