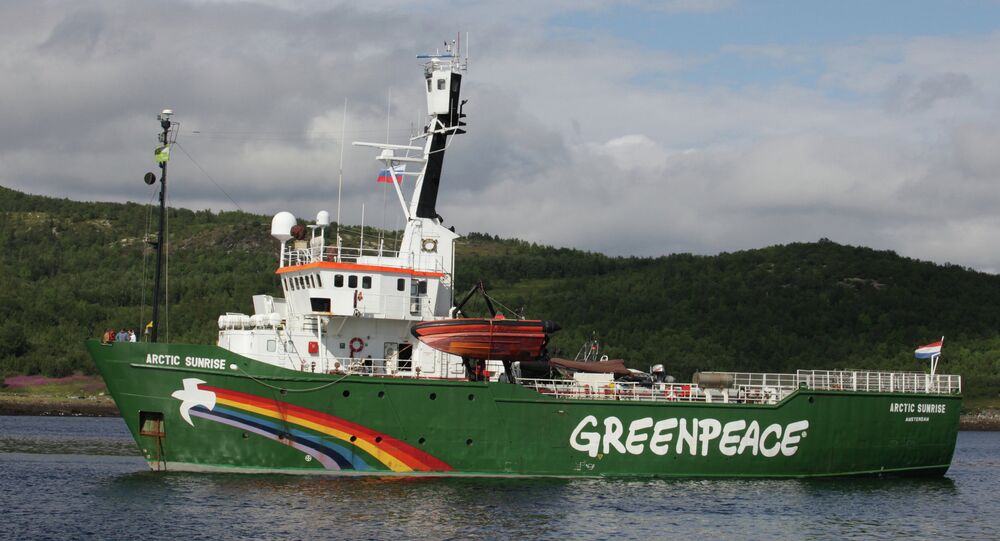 According to Greenpeace, the Spanish Navy has rammed three their motor boats, launched from the Arctic Sunrise ship off the Canary Islands in protest against oil drilling by the Spanish Repsol oil company, "deliberately ramming the boats and putting the lives of peaceful activists at risk".

MADRID, November 16 (Sputnik) – The Spanish Navy has rammed three Greenpeace motor boats, launched from the Arctic Sunrise ship off the Canary Islands in protest against oil drilling by the Spanish Repsol oil company.

A Sputnik correspondent reported following the incident that the Spanish Greenpeace has called for the country's defense minister to resign after the incident.

"Our ship, the Arctic Sunrise, occupied the drill site before the [Repsol] drilling vessel arrived. It maintained the occupation, despite pressure from the authorities," Greenpeace said on its website Saturday.

According to Greenpeace, the Spanish authorities "reacted violently", "deliberately ramming the boats and putting the lives of peaceful activists at risk".

Greenpeace also released a video, which shows Spanish Navy boats, sailing at high speed and smashing into those launched from the Arctic Sunrise, with one activist being knocked into the water as a result.

"The 23 year old Italian, who was knocked overboard and had her leg broken, has been taken to a hospital on shore by a navy helicopter, and is in good condition. Another activist was treated on board the Arctic Sunrise for minor cuts," Greenpeace said.

The Arctic Sunrise ship was released from Russian custody in August, almost a year after the vessel left the Norwegian port of Kirkenes to protest the dangers of Arctic oil development. The icebreaker was seized on September 19, 2013, following its inference with Russian energy giant Gazprom as it prepared to drill the world's first oil well in the Arctic waters. Greenpeace objects to Arctic oil extraction due to fears of a spill and climate risks of burning oil and gas.