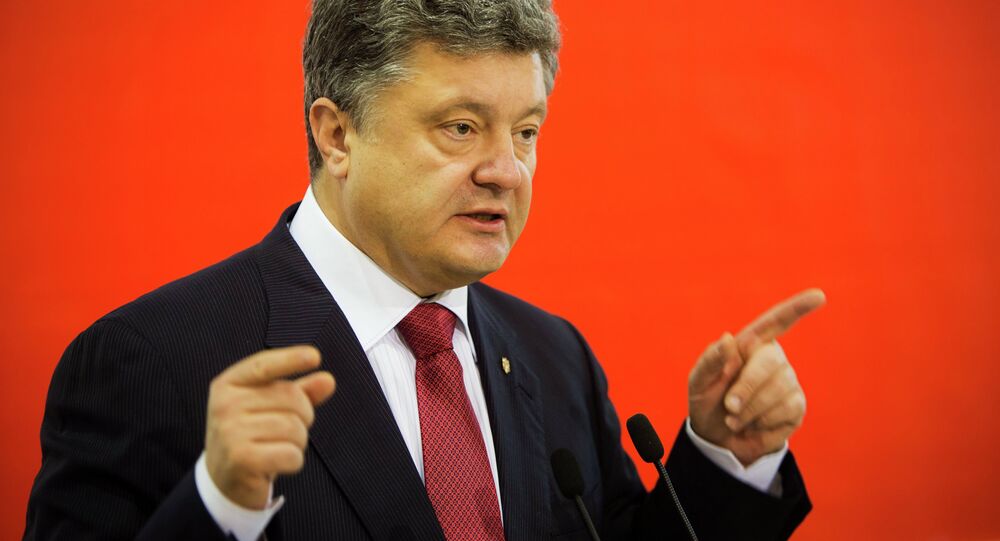 Ukrainian President Petro Poroshenko's speech at the Odessa Opera House late last month, which demonstrates an “Us” and “Them” mentality, has gone viral on Russian language social media.

MOSCOW, November 14 (Sputnik) — Comments from a speech made by Ukrainian President Petro Poroshenko late last month that Donbas children will “sit in cellars” has gone viral on Russian language social media over the last couple of days, literally adding insult to injury in the ongoing conflict in eastern Ukraine.

The most offensive of the president’s remarks, made in a speech October 23 at Odessa’s Opera House and captured on video, noted that “we [in Ukraine] will have work they – [in the Donbas] won’t. We will have pensions – they won’t. We will care for our children and pensioners – they won’t. Our children will go to school, to kindergartens – their children will sit in cellars. They don’t know how to organize or do anything. This, ultimately, is how we will win this war.”

Social media commentators noted that Poroshenko’s remarks indicated that he was not planning on stopping the military operation in the country’s east, including the shelling of cities, despite claims to the contrary. “Why else would children be sitting in cellars [serving as bomb shelters] instead of going to school,” one Ukrainian Antifa activist wrote.

The comments mark a clear separation by the President of the Ukrainian people between “Us” and “Them”.

Visiting Odessa on October 23, Poroshenko also brushed off criticism that the city had become home to the Banderites, telling the crowd that “I consider there to be no higher complement for Odessa,” local media quoted him as saying. The insensitive comments came close to the six month anniversary of the Odessa House of Trade Unions building fire, where 48 eight people were brutally murdered by fascist radicals, and dozens more injured.

New Report on Human Rights in Ukraine to Cover Period Up to October 31: UN