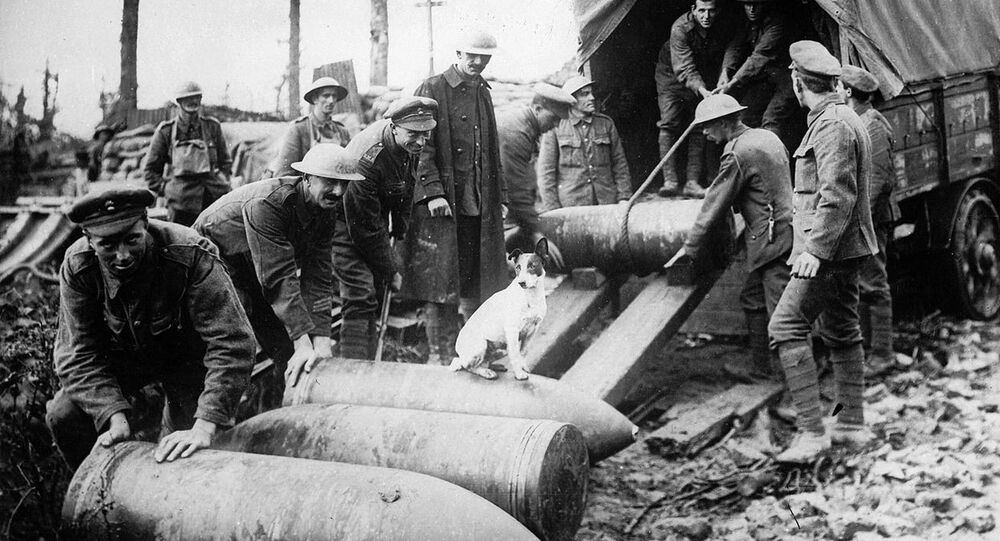 November, 11 is celebrated as the day of the end of World War I, 96 years ago the Entente Powers and Germany signed an armistice.

MOSCOW, November 11 (RIA Novosti) — November 11 is the day when back in 1918 the Entente Powers and Germany signed an armistice that signified the end of hostilities in World War I.

World War I was the first armed conflict on a global scale, in which 38 out of the then 59 independent states took part. It was primarily caused by antagonism between two large blocs: the Triple Entente (the coalition between Russia, Britain and France) and the Triple Alliance (the coalition of Germany, Austria-Hungary and Italy).

The war was triggered by the assassination of Archduke Franz Ferdinand, heir to throne of the Austro-Hungarian Empire, and his wife, by Gavrilo Princip, a member of the Serbian revolutionary movement Mlada Bosna (Young Bosnia) and military society Black Hand in Sarajevo, Bosnia, on June 28, 1914.

On July 23, Austria-Hungary issued an ultimatum to Serbia, accusing its government of supporting terrorism and demanding that Serbia allow Austro-Hungarian military units on its territory. The Serbian government expressed its readiness to settle the conflict but the Austro-Hungarian government did not reciprocate, and declared war on Serbia. Hostilities on the border between the two states broke out on July 28.

On July 30, Russia announced total mobilization, fulfilling its commitments to Serbia as an ally. Germany used this as a pretext to declare war on Russia on August 1 and on France on August 3. At the same time, it declared war on neutral Belgium, which had refused to let German troops pass through its territory. On August 4, Britain and its dominions declared war on Germany, and on August 6, Austria-Hungary declared war on Russia.

In August 1914, Japan joined the hostilities and in October Turkey entered the war on the side of the Germany-Austria-Hungary alliance. In October 1915, the so-called Central Powers comprising Germany, Austria-Hungary and the Ottoman Empire were joined by Bulgaria.

Italy, initially neutral, under diplomatic pressure from Great Britain declared war on Austria-Hungary on May 23, 1915, and on Germany on August 28, 1916.

The Western (French) and the eastern (Russian) fronts became the main battlefields on the ground, while the North Sea, the Mediterranean and the Baltic Sea became the main theaters of war at sea.

Hostilities broke out on the Western Front as German troops launched their Schlieffen Plan, which saw a large offensive on France via Belgian territory. However, Germany's hopes for a quick rout of France did not come true, and by mid-November 1914, the warfare became static. The sides faced each other in trenches along some 970 km (some 600 miles) of Germany's border with Belgium and France. Until March 1918, each side sustained enormous losses to achieve any, even minor, changes in the frontline.

During the fluid phase of the war, the Eastern Front was located along Russia's border with Germany and Austria-Hungary, and later on pushed back into Russia. In line with its commitment to France, Russia started a campaign on the Eastern Front to draw German forces from the Western Front. During two major battles – for East Prussia and Galicia – the Russian army defeated Austro-Hungarian troops, captured Lemberg (now Lviv) and outflanked the enemy to the Carpathians by besieging Przemysl, a large Austrian fortress. However, the Russian troops failed to build on the progress because of huge human and materiel losses. Reinforcements and ammunition did not arrive in time due to a lack of transportation routes.

On the whole, the Entente won the campaign of 1914. Germany was defeated in the Battle of the Marne, Austria in Galicia and Serbia, and the Ottoman Empire in the Battle of Sarikamish. In the Far East, Japan seized the port of Jiaozhou and Germany's Mariana, Caroline and Marshall Islands. Britain captured the rest of Germany's territories in the Pacific. In July 1915, British troops seized Germany's protectorate of South-West Africa.

World War I saw the use of new means of warfare. The first air raid took place on October 8, 1914, when British planes attacked German zeppelin factories in Friedrichshafen. This raid was followed by the construction of new planes – bombers.

Germany used chemical weapons for the first time in the Battle of Ypres, Belgium, on April 22, 1915. After this battle, both warring parties began to regularly use poison gases, such as chlorine, phosgene and later on mustard gas).

The biggest battles of 1917 – the Nivelle Offensive and the Battle of Cambrai – showed the advantages of tanks and gave rise to the tactic of the combined use of infantry, artillery, tanks and air force.

At the end of 1916, Germany and its allies raised the possibility of a peace agreement for the first time, but the Entente rejected the initiative. At that time the active participants in the war had 756 divisions, which was twice as many as at the start of the hostilities. However, they had lost their more qualified military personnel, and now mostly consisted of older reserve soldiers and young recruits from early drafts that had not received proper military, technical and physical training.

In 1917, two major events exerted dramatic influence on the balance of forces. Remaining neutral for a long time, the United States declared war on Germany on April 6, 1917. This decision was influenced by an incident off the southeastern coast of Ireland, when the British ocean liner "Lusitania," en route from New York to Liverpool, was attacked by a German submarine. There were many Americans among the passengers and 128 of them were killed.

Following the United States, the Entente was joined in 1917 by China, Greece, Brazil, Cuba, Panama, Liberia and Siam.

The other serious change in the alignment of forces occurred when Russia withdrew from the war. The Bolsheviks that had come to power by then signed an armistice on December 15, 1917, and a peace treaty in Brest-Litovsk on March 3, 1918. Under the Brest-Litovsk treaty Russia ceded its rights to Poland, Estonia, Ukraine, part of Belarus, Latvia, the Trans-Caucasus, and Finland. The Ottoman Empire received Ardahan, Kars and Batum. In all, Russia lost about one million square kilometers (some 386,000 square miles) of its territory. In addition, it had to pay six billion marks to Germany in reparations.

The allies broke through the German frontline on August 8, 1918, in the Battle of Amiens. Entire divisions surrendered almost without any resistance. This was the last major battle of the war.

After the Entente's onslaught on the front at Salonica, on September 29, 1918, Bulgaria was the first to sign a truce. The Ottoman Empire surrendered on October 30 and Austria-Hungary on November 3 of the same year.

Germany was swept by riots. On October 29, 1918, two warship crews in the port of Kiel refused to go to sea on a naval mission. This incident led to a more serious mutiny. Mass riots spread all over the country. In north Germany soldiers wanted to establish councils of soldiers" and sailors" deputies after the Russian model. On November 9, the abdication of Kaiser Wilhelm II was announced and a republic was proclaimed.

On November 11, 1918, the German delegation signed an armistice near Rethondes in the forest of Compiegne, France. Germany was obliged to free the occupied territories within two weeks, establish a neutral zone on the right bank of the Rhine, hand over weapons and transport to the Allies, and release all prisoners. The political provisions of the armistice cancelled the Brest-Litovsk and the Bucharest peace treaties, while its financial terms compelled Germany to pay reparations for damage and return all valuables. The final terms for a peace treaty with Germany were determined at the Paris Peace Conference in the Versailles Palace in Paris on June 28, 1919.

World War I encompassed two continents – Eurasia and Africa – for the first time in human history, and was one of the largest and bloodiest in the world. Out of the 70 million men who were mobilized, 9.5 million were killed or died of injuries, more than 20 million were wounded and 3.5 million incapacitated. The heaviest losses (66.6 percent of the total amount of losses) were sustained by Germany, Russia, France and Austria-Hungary. According to estimates, the total cost of the war, including material losses, ranges from $208 to $359 billion.

World War I Uniforms and Equipment