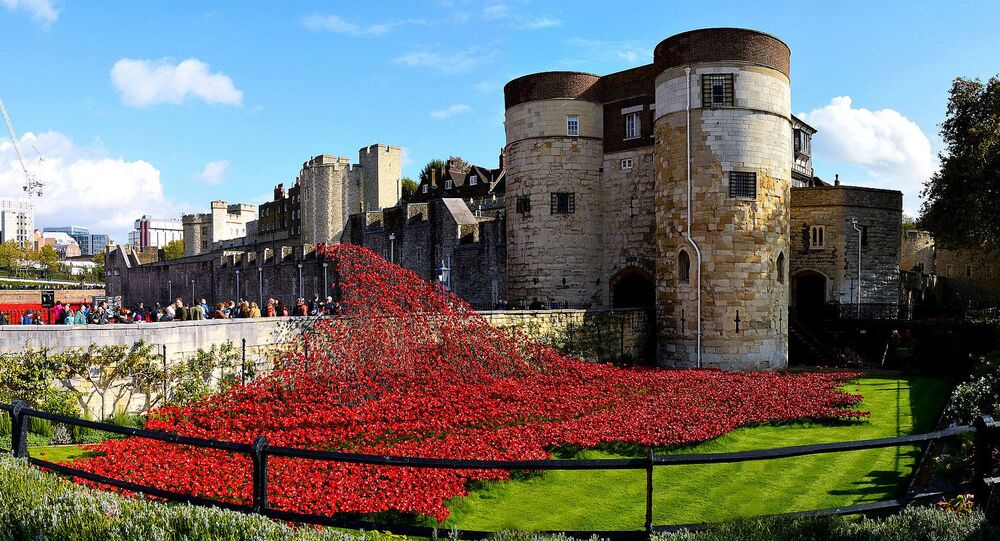 The sea of artificial poppies spills from a window in the ancient battlements, cascading into the great grass-covered moat around the Tower of London.

Part shrine, part art installation, the poppy display has struck a chord with the British public, and with many tourists from other nations who journey to the iconic castle and stare quietly at the great crimson river circling the fortress that can be dated back to 1066.

The use of the red poppy in British commemorations is linked to the appearance of the wild flowers in the trenches and battlefields of Flanders and Northern France. The bright scarlet flowers were the first signs of life to appear above the pock-marked land which had been turned into a vast swathe of desolate mud. The symbol was adopted as the symbol of the forces’ association by the Royal British Legion in 1921. As early as 1933, a white poppy symbol was adopted by the Cooperative Women’s Guild and sold on Armistice Day to muster support for an end to all wars. The poppies have since been sold by the pacifist organisation, the ‘Peace Pledge Union’.

The historic significance of Armistice Day 2014 was always going to be huge. But how the nation should commemorate the end of the First World War was also a matter of intense debate. Politicians and historians wanted to mark the occasion with due solemnity, but caution was urged in case there was any note of ‘jingoism’ or indeed celebration of an event in which so many died. The words ‘winners’ and losers’ were not to be used. For a public symbol of the vast numbers of British dead in 1914-18 the installation of 888,246 ceramic poppies proved an elegant and fittingly contemporary solution. The idea was simple, yet startling and immense in its visual power, and it came from Paul Cummins, a young ceramicist in Derbyshire.  And the setting, the vast moat of the Tower of London, as potent a symbol of English history as anyone could wish for, could hardly be bettered.

© Flickr / Robert Pittman
Ceramic poppies at the Tower of London

An estimated four million people have now journeyed to Tower Hill to stand and stare at the growing sea of red flowers. The poppies themselves cover an area of some 16 acres.  Members of the public have been able to apply to buy the commemorative poppies, with the funds raised going to various military charities supporting veterans and war wounded.

At times the crowds have been so huge that the nearest underground station has advised passengers to get out at other stations because the crush of visitors has been so massive. And yet the numbers are still just a fraction of those who died in the First World War, the British Empire alone mobilised some nine million personnel. But an estimated 40% of the world’s population at the time were affected by the War. Of the 72 million troops mobilised, just over half would be killed, wounded or taken prisoner.

For Russia the numbers are even more sobering. Twelve million men were mobilised of whom 1.7 million died and almost 5 million were wounded.  For Germany the toll too was immense. Of 11 million men mobilised, an estimated 65% were either killed, wounded or taken prisoner. For all of the European nations the grand total of combat deaths was 8,5 million, with some estimates of the total loss of life amounting to up to thirty million people.

In Britain, November 11th is commemorated as Remembrance Day and traditionally marked by a two minute silence at 11 a.m., the time the guns ceased firing after a peace treaty was signed between France, Germany and Britain at 5 a.m. in 1918.   This was not the only Armistice, since Soviet Russia signed its own peace with the Central Powers at Brest-Livotsk on March 3rd 1918. The other signatories were Germany, Austria-Hungary, Bulgaria and Turkey. In 2013 Russia officially commemorated its own WWI Remembrance Day, using August 1st the date marking Russia’s official entry into the conflict.