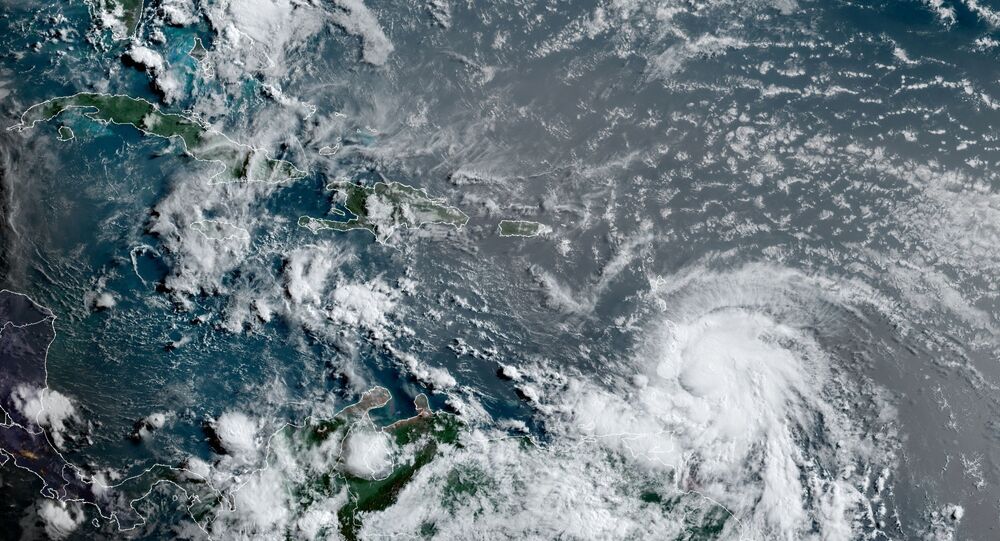 The 2021 hurricane season officially kicked off on June 1 and is expected to run until November 30. Earlier, the US National Oceanic and Atmospheric Administration (NOAA) predicted that the season is likely to match the ferocity that defined the 2020 season, which saw a record 30 storms named.

Officials at the US National Hurricane Center (NHC) reclassified tropical storm Elsa as the very first hurricane of the 2021 season on Friday, marking the start of what forecasters anticipate will be a very active period across the Atlantic Ocean.

The latest advisory released by the NHC states that Hurricane Elsa is located about 95 miles from the volcanic island of Saint Vincent in the Caribbean, and is moving at a pace of 29 miles per hour in a west-northwest direction.

At present, Elsa has attained a minimum central pressure of 991 millibars and maximum sustained winds of 85 miles per hour, which would designate the storm as a Category 1 cyclone. The system’s hurricane-force winds currently extend some 25 miles from the eye of the storm, with tropical storm winds reaching out at least 140 miles.

A storm surge between 1 and 3 feet is expected at the Windward Islands, with another 2 to 4 feet due along the southern coast of the island of Hispaniola. As for rainfall totals, anywhere between 4 and 9 inches may cover the Windward and Leeward islands on Friday, with isolated portions of up to 15 inches of rain. Nearby Barbados is expected to be affected as well.

“Elsa will move away from the Windward Islands during the next several hours, move across the eastern Caribbean Sea this afternoon and tonight, and move near the southern coast of Hispaniola late Saturday or Saturday night,” the NHC forecast states.

“By Sunday, Elsa is forecast to move near Jamaica and portions of eastern Cuba, and move near portions of central and western Cuba Sunday night and early Monday.”

Officials are anticipating that Elsa’s sustained wind force may decrease in strength as the cyclone moves near Cuba, before the storm makes its way stateside toward Florida, Georgia and South Carolina in the following week.

Authorities have initiated hurricane warnings along the southern coast of the Dominican Republic’s Punta Palenque to Port Au Prince, Haiti, with a hurricane watch implemented for Jamaica.

Tropical storm warnings are in effect for Grenada, Saba and Sint Eustatius and Cayman Brax and Little Cayman, as well as the northern coast of the Dominican Republic from Cabo Engano to Bahia de Manzanillo.

Prior to the start of the hurricane season, NOAA forecasted that 2021 would see between 13 and 20 named storms, noting that as many as five could become major hurricanes.