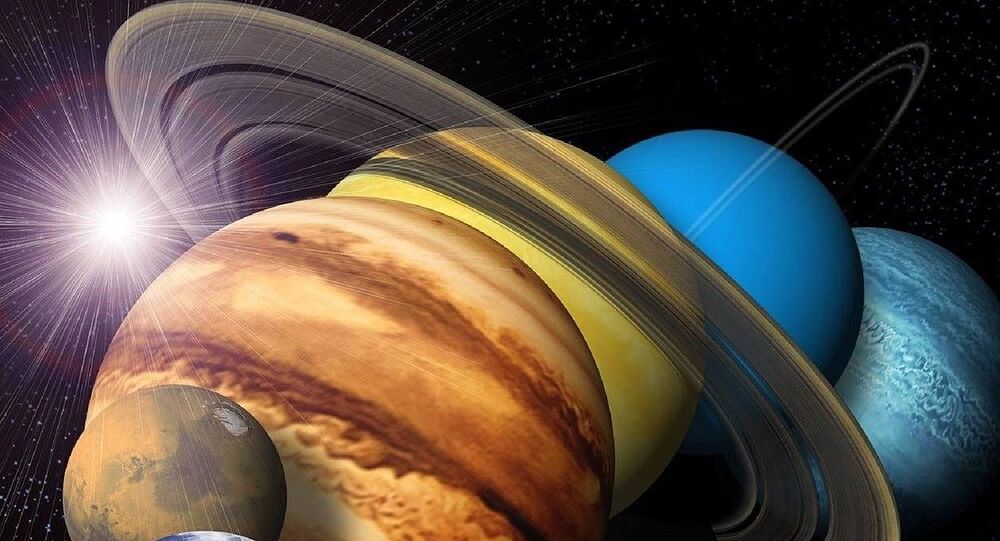 Jupiter, Saturn to Appear as 'Double Planet' Next Month in ‘Exceptionally Rare’ Event

On December 21, Jupiter and Saturn will be close together, or in conjunction, in an extremely rare event, according to a release from Rice University published by Phys.org.

In astronomy, conjunction refers to when two astronomical objects have the same right ascension or are on the same ecliptic longitude. Right ascension is defined as the angular distance of a point measured eastward along the celestial equator from the sun.

According to Space.com, when Jupiter and Saturn are in conjunction, it’s typically referred to as a “Great Conjunction” because the two gas giants don’t frequently have close encounters.

Just after sunset on December 21, the two planets will only be 0.1 degrees apart. This conjunction will be the first by the planets since the year 2000. However, to see an extremely close alignment, like the one that will take place in December, one would have to go back to 1226, according to the Rice University release. The next time Jupiter and Saturn will be this close together in the sky will be on March 15, 2080.

"Alignments between these two planets are rather rare, occurring once every 20 years or so, but this conjunction is exceptionally rare because of how close the planets will appear to one another," Rice University astronomer Patrick Hartigan said in the release. "You'd have to go all the way back to just before dawn on March 4, 1226, to see a closer alignment between these objects visible in the night sky."

Throughout the summer, Jupiter and Saturn have been slowly approaching one another. Between December 16 and December 25, the two planets will be separated in the night sky by less than a full moon's diameter.

"On the evening of closest approach on December 21 they will look like a double planet, separated by only 1/5th the diameter of the full moon," said Hartigan, who is also a professor of physics and astronomy. "For most telescope viewers, each planet and several of their largest moons will be visible in the same field of view that evening."

Although the conjunction will be most visible near the equator, the rare event will be visible in the western sky anywhere on Earth and will be best viewed during twilight.

"The further north a viewer is, the less time they'll have to catch a glimpse of the conjunction before the planets sink below the horizon," Hartigan explained.

"By the time skies are fully dark in Houston, for example, the conjunction will be just 9 degrees above the horizon," Hartigan added. "Viewing that would be manageable if the weather cooperates and you have an unobstructed view to the southwest."

Transcending Horizons: Wonders of Our Planet and Outer Space as Seen by Russian Cosmonauts