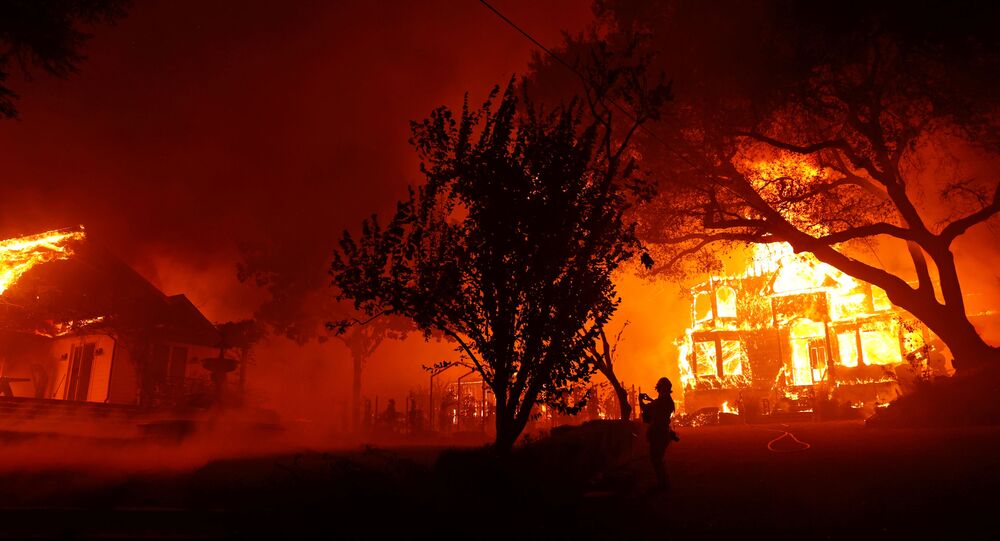 As a dangerous heat wave has struck the Golden State, thousands of residents living in California’s Shasta and Napa counties have been ordered to flee their homes after two new wildfires emerged over the weekend.

The US National Weather Service (NWS) issued multiple alerts over the weekend that indicated California would be hit with a one-two punch from Mother Nature, which shelled out heat wave conditions as firefighters continued to battle raging fires across the state.

A heat advisory issued by the agency is due to stay in place until 8 p.m. local time on Thursday. Along the California coastline, temperatures are expected to range in the mid to lower 90s in degrees Fahrenheit, whereas inland locations are forecast to level between the upper 90s and lower 100s.

“Dangerous hot and dry conditions are expected much of this week,” reads a notice from the NWS’ Los Angeles-Oxnard branch. “Gusty offshore flow will help to drive temperatures up, with triple digits in the valleys and nineties across some coastal areas Tuesday through at least Thursday.”

The region isn’t expected to see cooler temperatures until Friday, with the heat subsiding to a more “normal” level by Sunday.

In addition to checking on neighbors and relatives, residents are urged to stay hydrated, stay out of the sun and take precautions, like staying in the shade, when outdoors.

The heat wave comes as climate scientist Daniel Swain recently issued a report indicating that California endured its hottest August on record this year. The month of August also saw temperatures in Death Valley reach 130 degrees Fahrenheit - a first since 1913, according to the NWS.

However, as first responders have continuously battled against the state’s worst wildfire season on record, with more than 3.6 million acres burned, the fight is far from over.

Brett Rossio, a meteorologist with AccuWeather, told USA Today that the current heat wave is “creating a tinderbox” in the already fire-ravaged state by “decreasing the dew point and thereby decreasing the relative humidity.”

In fact, two new blazes - the Zogg and Glass fires - erupted late Sunday in the state’s northern region, forcing thousands of residents in the area to evacuate from their homes.

According to the California Department of Forestry and Fire Protection (Cal Fire), neither of the two fires has been contained, and they have destroyed nearly 30,000 acres of land in the state’s Shasta and Napa counties. The Sacramento Bee reported that several known structures, such as the historic 41-year-old Chateau Boswell winery, have been destroyed.

Multiple evacuation orders have been issued across the state for individuals living in Santa Rosa, Napa-Sonoma and near the Trione-Annadel State Park, among other areas.

“There have been numerous evacuations, that’s been going on through the night,” Tyree Zander, spokesperson for Cal Fire, told the Bee. “[The fires] have a rapid rate of spread, a dangerous rate of spread.”

As of Monday morning, Cal Fire told the outlet that some 1,070 firefighters are battling the Glass fire.