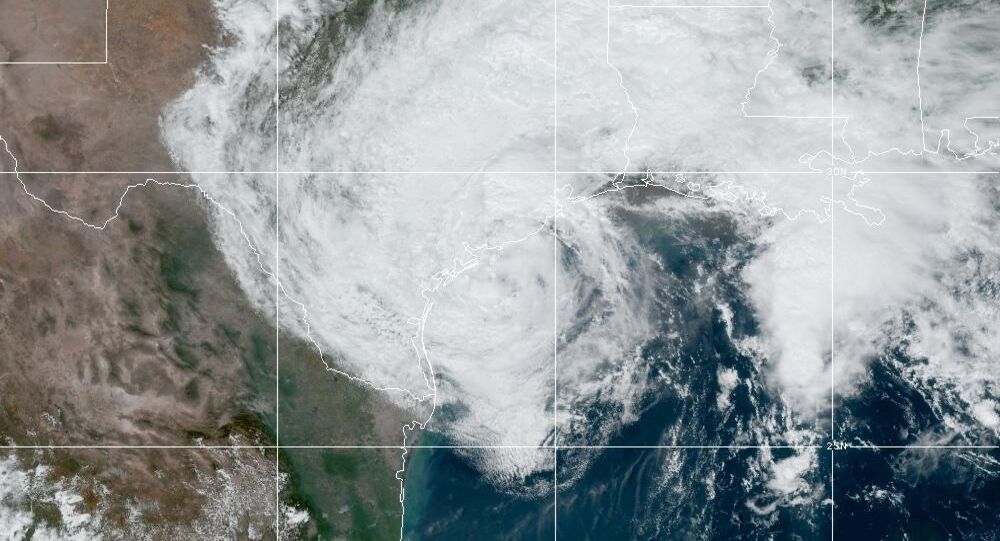 The hurricane-embattled US Gulf Coast region is set to undergo yet another round of clashes with Mother Nature this week, as Tropical Storm Beta approaches the US’ southern coastline and brings with it “life-threatening” weather conditions.

The US National Hurricane Center (NHC) stated in its most recent update that the storm is located about 45 miles southeast of Port O’Connor, Texas, and that it has reached sustained maximum wind speeds of 45 mph. At present, Tropical Storm Beta is moving at a pace of 7 mph in a west-northwest direction.

Forecasters anticipate Beta will remain along the Texas coast but will ultimately experience a “decrease in forward motion and a sharp turn to the north and northeast.” Storm tracking suggests that Beta “will likely move inland” by late Monday or early Tuesday.

Beta’s tropical storm-force winds are forecast to extend up to 175 miles from the storm’s center, and the powerful weather event is expected to create a storm surge of between 1 and 4 feet and bring up to 10 inches of rainfall along the US Gulf Coast. In some isolated areas, residents may see upwards of 15 inches of rain.

The NHC has issued storm warnings to areas from Port Aransas, Texas, to Morgan City, Louisiana - a span of nearly 500 miles. Louisiana’s Cameron Parish, which was devastated in late August by Category 4 Hurricane Laura, has also been included under the alert.

“Swells generated by a combination of Beta and a cold front over the northern Gulf of Mexico will continue along the coasts of Louisiana and Texas during the next couple of days,” the hurricane agency warned in its update. “These swells are likely to cause life-threatening surf and rip current conditions.”

As Beta moves inland, the storm may drop an additional 3 to 5 inches of rain in portions of the Ark-La-Tex tri-state region and lower Mississippi Valley through Friday.

Rob Miller, a senior meteorologist with AccuWeather, told USA Today that the amount of rainfall brought to the US Gulf Coast by Beta would “lead to significant flooding, which may last for several days.”

Ahead of Beta’s landfall, the storm-induced rising waters have already caused structural damage. Over the weekend, flooding was detected all along the Texas coastline, and even a portion of the 61st Street Fishing Pier in Galveston, Texas, was ripped off as a result of rough surf during high tide.

Beta is the 23rd named storm of the 2020 hurricane season, officially claiming the second letter of the Greek alphabet on Friday.