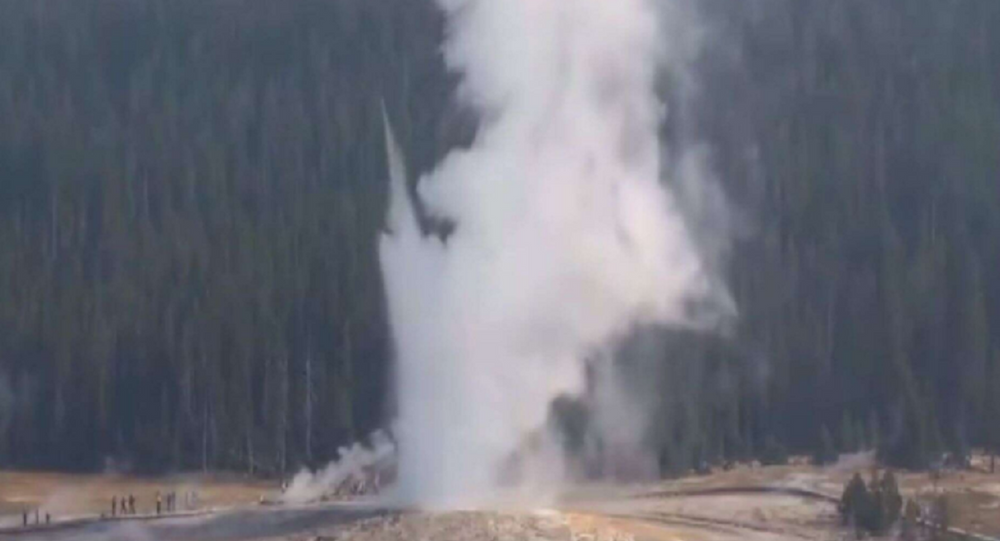 Video: Yellowstone’s Giantess Geyser ‘Back to Life’ For First Time in Six Years

For the first time in more than six years, a geyser at Yellowstone National Park erupted last Tuesday.

“On Tuesday, August 25, Giantess Geyser roared back to life after a period of more than 6-1/2 years without erupting,” Yellowstone National Park tweeted Saturday, along with a clip of the eruption.

​According to the US National Park Service (NPS), the Giantess Geyser, located in Wyoming, typically erupts between two and six times a year, but had recently been quiet for more than half a decade.

“This fountain-type geyser erupts in several bursts 100-200 ft (30-60m) high … The surrounding area may shake from underground steam explosions just before the initial water and/or steam eruptions. Eruptions may occur twice hourly and continue for 4-48 hours,” the NPS adds.

On Saturday, the US Geological Survey (USGS) noted that the Giantess Geyser used to erupt more frequently.

“It used to erupt more frequently in the past. The 6-year gap between eruptions in the longest since at least the 80s, but it has had years-long dormant periods before. Why geysers turn off and on is something that is not well understood. They are very fragile systems,” the USGS tweeted.

Geysers are hot springs characterized by occasional and turbulent discharges of water and steam, which are a result of pressure building up underground.

According to the NPS, Yellowstone has more than 10,000 “extraordinary” hydrothermal features including hot springs, geysers, mudpots and fumaroles.