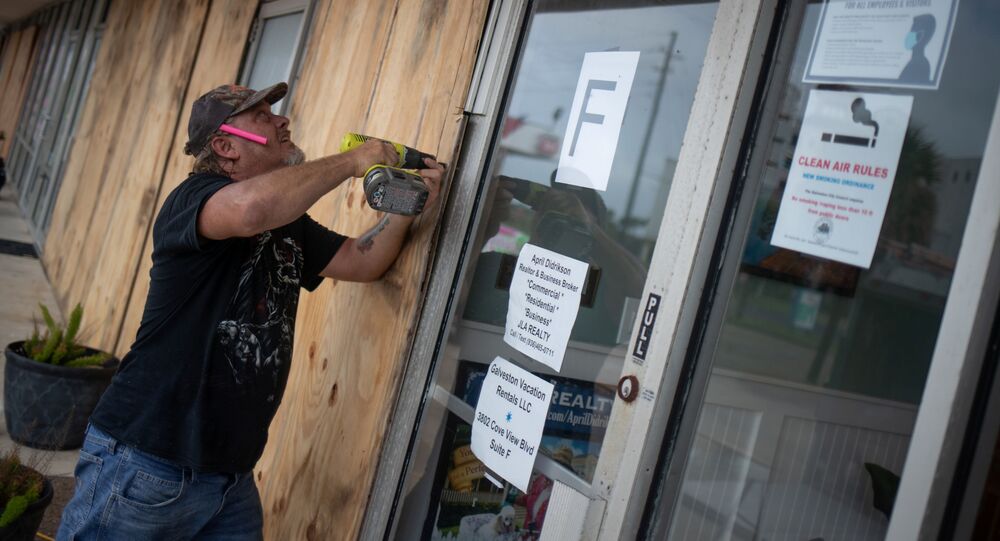 The US National Hurricane Center (NHC) indicated in its latest weather update on Wednesday that Hurricane Laura will strike the US Gulf Coast as a Category 4 storm after picking up strength in the Gulf of Mexico.

At present, Laura is located about 200 miles from Lake Charles, Louisiana, and Galveston, Texas - the two US southern states that are expected to take the brunt of the powerful storm’s wrath.

The weather agency indicated that Laura has reached maximum sustained wind speeds of 140 mph and that the cyclone is moving toward the US coastline at a pace of 16 mph. Hurricane Laura is due to strike the US coast late Wednesday into early Thursday, bringing with it a “catastrophic storm surge, extreme winds and flash flooding.”

Coastal areas within Louisiana and Texas are forecast to see storm surges of anywhere between 2 and 20 feet depending on whether Laura arrives at high tide. The weather agency warned that the “deepest water will occur along the immediate coast near and to the right of the landfall location, where the surge will be accompanied by large and destructive waves.”

“Unsurvivable storm surge with large and destructive waves will cause catastrophic damage from Sea Rim State Park, Texas, to Intracoastal City, Louisiana, including Calcasieu and Sabine Lakes,” the NHC’s update reads. “This storm surge could penetrate up to 30 miles inland from the immediate coastline in southwestern Louisiana and far southeastern Texas.”

The NHC also warned that “a few tornadoes” are expected to develop Wednesday evening in Louisiana, southeast Texas and southwestern Mississippi. The threat of tornadoes will continue into Thursday, with Arkansas also being at risk.

As for the amount of rainfall expected, forecasters anticipate that the storm will bring as much as 15 inches of rain in parts of Louisiana, Texas and Arkansas from Wednesday to Friday. Anywhere between 2 and 4 inches of rain, with isolated maximum amounts of 6 inches, are predicted to fall in Mississippi, Ohio and Tennessee.

With Hurricane Laura forecast to make landfall in upper Texas and southwest Louisiana’s coastline later Wednesday, hundreds of thousands of individuals living within the storm’s projected path have either evacuated from their communities or opted to weather the storm in their homes.

As the storm is arriving amid the COVID-19 pandemic, some residents have been directed by local officials to relocate to hotels, where they’re able to self-isolate, instead of seeking shelter at evacuation centers.

Nim Kidd, the chief of the Texas Division of Emergency Management, noted during a Tuesday briefing on the storm that a hotel or a motel room during the storm would be the “safest place for families to be.”

“We worry, of course, about people evacuating into group settings, trying to keep them safe if they’re having to go to a shelter,” she said. “I know that there’s been a lot of time to encourage people to go to hotels instead, but that’s not always very easy or feasible.”

During a Wednesday update, Texas Gov. Greg Abbott doubled down and urged residents to “take these last few hours to get out of harm’s way,” especially since the storm is expected to flood roadways and prevent first responders from offering aid.

In nearby Louisiana, the message to residents wasn’t much different, as Gov. John Bel Edwards said Wednesday that “people need to heed warnings they’ve been given and evacuate now,” and that they should not decide to stay in their homes based on how well they fared during past hurricanes that struck the state.

The most recent major hurricane that struck Louisiana was Rita in September 2005, which brought with it 115-mph winds. The last powerful cyclone that struck Texas was Hurricane Harvey in 2017.