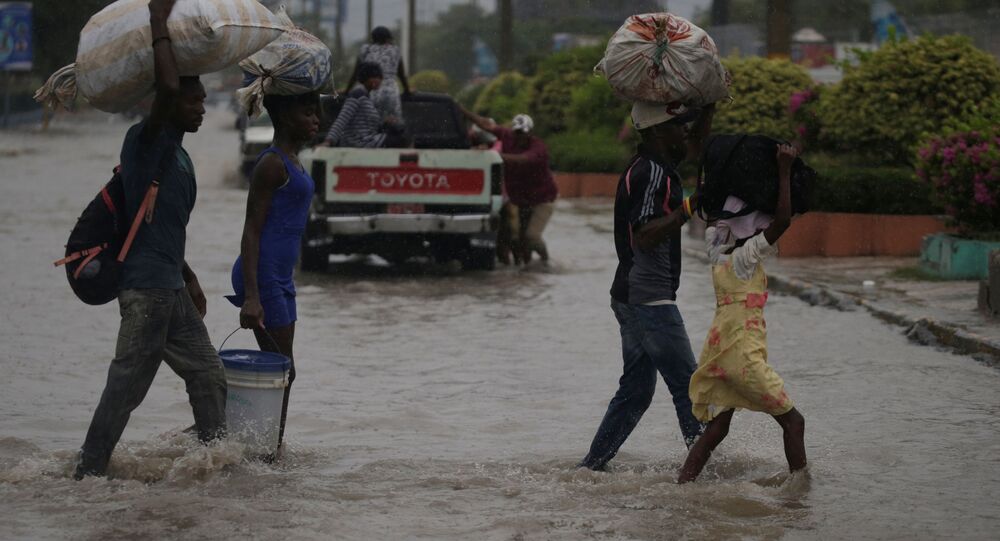 As two major storms are forecast to bring inches of rainfall and dangerous storm surges to the US Gulf Coast, thousands of residents have started making preparations ahead of what many weather experts are referring to as a “one-two punch” from Mother Nature.

According to the US National Hurricane Center’s (NHC) most recent updates, the twin hurricane threat to the US South was downgraded somewhat early on Monday, as Hurricane Marco weakened back to a tropical storm. However, the same cannot be said for Tropical Storm Laura, which is expected to make landfall late Wednesday as a Category 2 hurricane.

In its most recent release regarding Marco, the NHC stated that “gusty winds, heavy rainfall and lingering coastal flooding are expected” throughout Monday along the Louisiana coastline, as well portions of southeast Texas.

The NHC initially anticipated that areas from Morgan City, Louisiana, to Ocean Springs, Mississippi, were likely to experience a storm surge of between 2 and 4 feet; however, the agency later lifted its coastal warning and watches in its most recent forecast.

Total rainfall accumulations for Marco are estimated to be between 2 and 4 inches, with some isolated areas expected to experience about 7 inches of rain through Tuesday. Additionally, the weather agency is warning individuals that tornadoes may develop Monday evening across the Florida Panhandle and the southern portions of Georgia, Alabama and Mississippi.

At present, Tropical Storm Marco is located roughly 40 miles from the mouth of the Mississippi River, moving at a pace of 6 mph with maximum sustained winds of 40 mph. It’s expected to downgrade into a tropical depression by early Tuesday.

As for Tropical Storm Laura, the growing cyclone is sitting some 65 miles southeast of Cuba’s Cayo Largo del Sur Island. Laura’s wrath is forecast to bring heavy rainfall across Cuba and Jamaica, drastically raising the chances of mudslides and life-threatening urban flooding in the region.

Data collected by reconnaissance aircraft used by the US Air Force and the US National Oceanic and Atmospheric Administration (NOAA) indicate that Laura’s maximum sustained winds have reached roughly 60 mph, and that the storm is expected to gain strength as it moves over the Gulf of Mexico. Laura is forecast to become a Category 1 hurricane Tuesday before strengthening even further ahead of its Wednesday landfall on US territory.

Over the weekend, Tropical Storm Laura was blamed for the deaths of at least 13 individuals as it moved through Haiti, the Dominican Republic and Puerto Rico. The powerful storm caused massive flooding, power outages and severe mudslides.

At the storm’s peak, more than 1 million people had lost power in the Dominican Republic, where flooding also caused several homes to collapse and cut off various isolated communities from first responders.

The storm fallout forced Puerto Rico Gov. Wanda Vazquez to declare a state of emergency over the weekend after some 200,000 homes and businesses were left without power and more than 10,000 lost access to a water source due to the storm.

At present, Tropical Storm Laura is moving toward the US at a pace of 20 mph. Upon arriving at the US Gulf Coast, Laura is expected to bring 4 to 8 inches of rainfall, with an isolated maximum amount of 12 inches along the Texas and Louisiana border.

“This rainfall could cause widespread flash and urban flooding, small streams to overflow their banks, and minor to isolated moderate river flooding,” the NHC warned, adding that “an isolated tornado will be possible later today into tonight across the Florida keys.”

Thousands of people along the US Gulf Coast have begun preparing for the storms, with many stocking up on food, water and sandbags to fortify their homes against surging water.

In Louisiana, hundreds of recreational vehicles lined up along Highway 46 on Monday in an effort to stay safe within the state’s levee system, which failed in 2005 after Hurricane Katrina made landfall.

Marco is the 13th named storm of this year’s hurricane season, following Tropical Storm Laura, which became the “earliest L-named storm in the Atlantic on record,” according to NOAA.

Mandatory Evacuation Ordered in Southeast Louisiana Ahead of Twin Storms