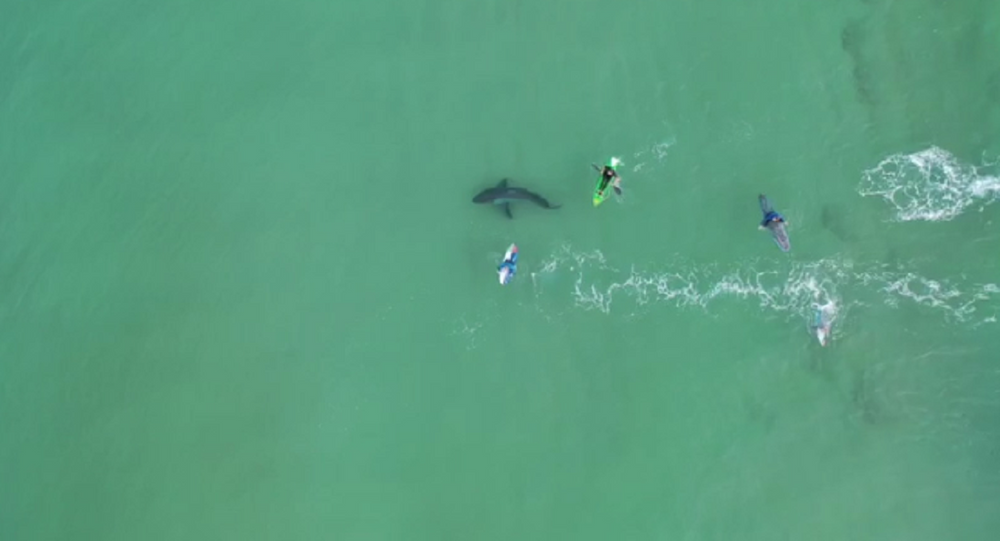 In a statement Tuesday, the organization warned beachgoers that a large number of shark sightings and encounters has been reported along the Plettenberg Bay coastline, as well as between Mossel Bay and Eastern Cape province’s Jeffreys Bay over the last few weeks.

​“The behavior seen in this drone footage shows that the shark is aware of the surfers and is investigating the surfers. It is important for people to remember that White sharks are naturally inquisitive Apex predators and that although shark bites are rare, water users must understand the inherent risk associated with sharing the ocean with these animals and change their behavior accordingly to avoid encountering sharks,” Sarah Waries of the City of Cape Town (CoCT) Shark Spotters program told NSRI this week.

According to NSRI, the increase in sharks in the region during this time of the year is just “part of the normal aggregation of these animals that take advantage of natural prey like seals and fish close in shore.”

However, NSRI also reassured beachgoers in its statement that it was equipped to deal with any incidents that may occur.

The CoCT Shark Spotters program advises the public to reduce the risk of encountering a shark by not swimming or surfing when birds, dolphins or seals are feeding in the water nearby or when spear fishing is taking place.

The organization also advises the public not to swim at night, if they are bleeding, beyond the breakers or if there is a whale nearby.

“If a shark has recently been sighted in an area, consider using another beach for the day,” the organization suggests, adding that people kayaking or surf-skiing in deep waters should paddle in groups, stay close together and potentially even use a personal shark shield.

The Florida Museum’s International Shark Attack File (ISAF) reveals that there were 140 “alleged shark-human interactions worldwide in 2019.” Out of all of the reported encounters, the ISAF confirmed 64 unprovoked shark attacks and 41 provoked attacks.