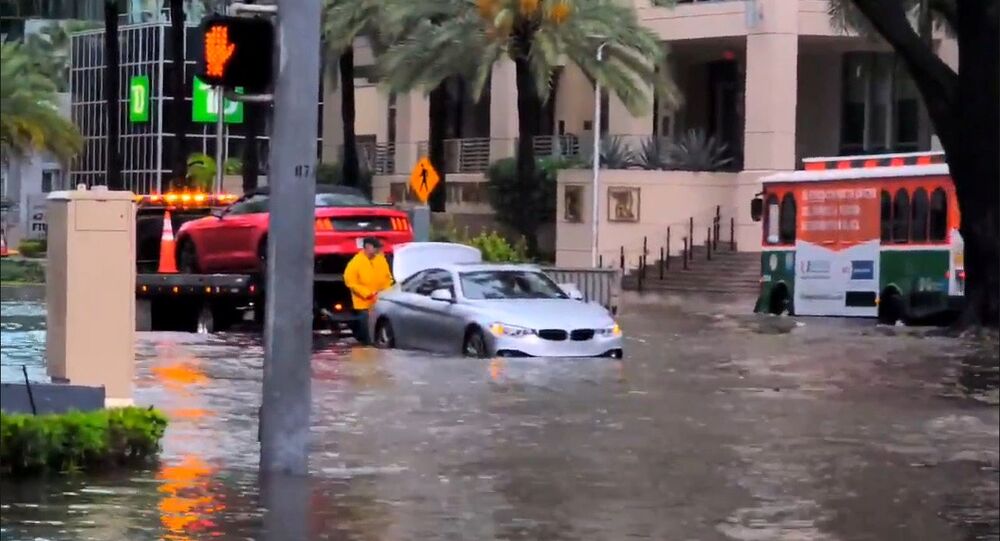 Miami, Florida, received half a foot of rain Tuesday evening, prompting the US National Weather Service (NWS) to issue flash flood warnings for the Northern Miami-Dade and Southern Broward counties as water poured into the streets.

According to the NWS, thunderstorms in the Miami area have caused “life threatening flash flooding.” The two-day rainfall in Miami on Sunday and Monday was the heaviest since 2012. Some parts of Florida received more rain than they did during Hurricane Irma in 2017, which were in the 9 to 15 inch range.

​On top of that, in just 90 minutes on Tuesday evening, another 5.5 inches of rain was dropped on southern Florida. Videos posted on social media showed at least an inch of water covering roadways in the Miami area.

“Previously, we were in moderate drought for the area,” Paxton Fell, a meteorologist for the NWS in Miami, told the Washington Post. “All this rainfall definitely helped, but since we’re so saturated, the ground can’t handle much.”

An EF1 tornado also started before 2 a.m. local time on Monday near the Redlands in Miami-Dade County. According to the Federal Emergency Management Agency (FEMA), EF1 tornadoes have wind speeds between 86 and 110 miles per hour and damage from the twisters can include “broken glass in doors and windows, uplift of roof decks and significant loss of roof covering (>20%), collapse of chimneys and garage doors, mobile homes pushed off foundations or overturned and moving automobiles pushed off roads.”

Surrounding areas in Florida, including Fort Lauderdale and the Upper Keys, also received heavy rains over the weekend, and similar downpours are expected in the Carolinas this week.