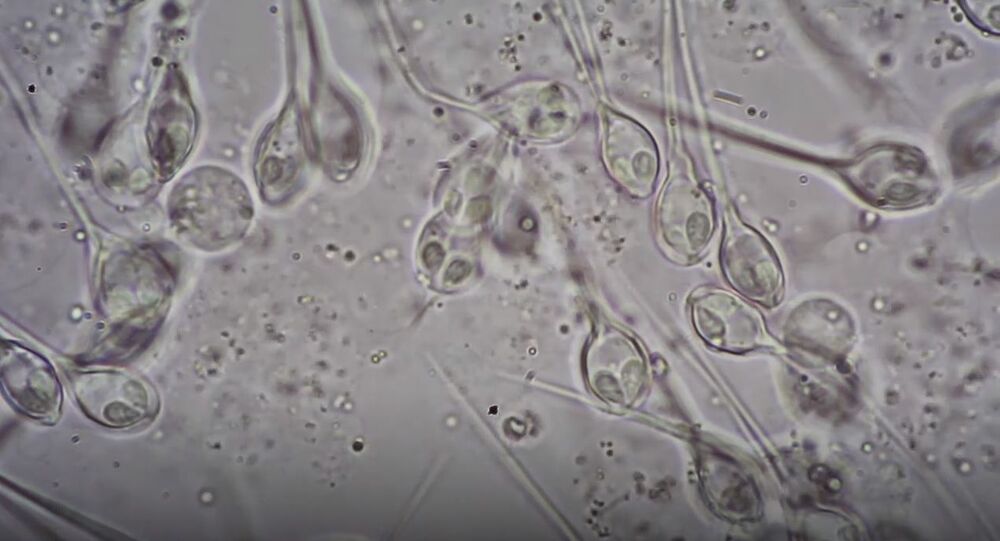 Newly Discovered 'Alien-Like' Sea Creature Doesn’t Need to Breathe, Scientists Not Sure Why

Studies identify that the sea creature, descended countless millennia ago from jellyfish, developed into a bizarre alien-like creature that does not follow the rules of life on planet Earth.

Marine biologists have discovered a living creature that does not need oxygen to survive, according to a new study published in the journal Proceedings of the National Academy of Sciences.

Named Henneguya salminicola, the tiny organism has spores resembling sperm cells, with two tails and "alien-like eyes", when observed under a microscope, according to Live Science.

Researchers have theorized that H. salminicola descended from jellyfish in the myxozoa family, and, over time, rid itself of many of the features most living beings use to stay alive.

“They have lost their tissue, their nerve cells, their muscles, everything,” Dorothée Huchon, an evolutionary biologist at Tel Aviv University told Live Science.

Over millennia, H. salminicola also lost its mitochondrial genome, one of the components of DNA that rule the respiration process.

“And now we find they have lost their ability to breathe,” Huchon added.

Though H. salminicola does contain a structure similar to mitochondria, it does not have the ability to metabolise oxygen, Huchon noted.

Researchers have not yet been able to explain how the creature survives without breathing, but some suggest that it is using energy it takes directly from other sea creatures it infects.

“Animals are always thought to be multicellular organisms with lots of genes that evolve to be more and more complex,” the professor said. “Here, we see an organism that goes completely the opposite way. They have evolved to be almost unicellular”.

H. salminicola is reportedly considered a major problem for fish farmers, as the tiny spore-like creatures create unsightly white spots in the flesh of infected fish, rendering them useless for the marketplace.

Digging Into It: Scientists Hunting for Alien Life Set Their Sights on Martian Depths