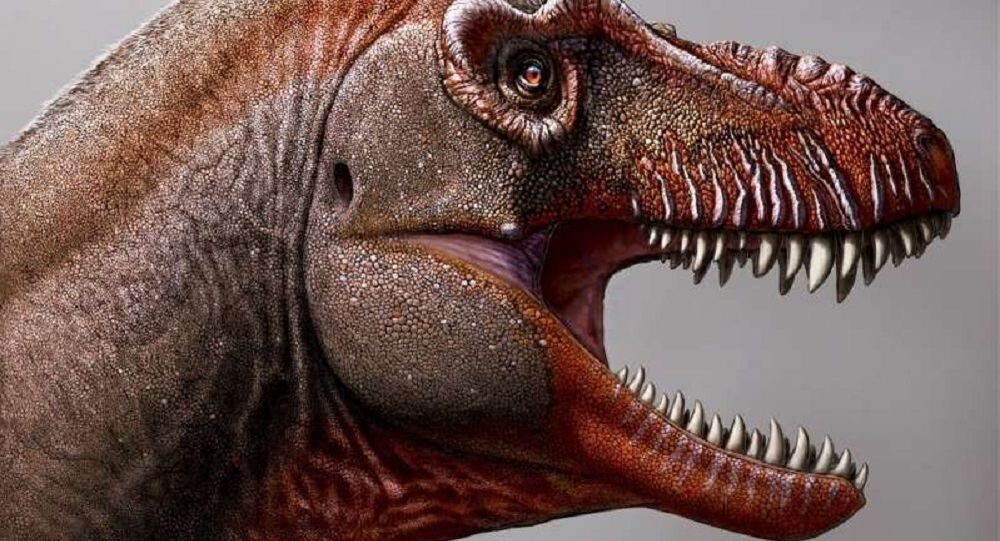 A new kind of tyrannosaur, dubbed the "reaper of death", was unearthed in the Canadian province of Alberta. Scientists have claimed that the new species of ancient animal is the oldest discovered in Canada.

According to Jared Voris, a University of Calgary PhD candidate who led the research identifying the new species, the ancient creature - registered as Thanatotheristes degrootorum - inhabited regions in and around Canada's Alberta some 79 million years ago, during the Cretaceous period, CBC reported.

The "reaper of death" reportedly terrorized other dinosaurs 11 million years before the famous and more commonly known Tyrannosaurus Rex appeared.

The first part of the new tyrannosaur's name - Thanatotheristes - could be translated roughly as "reaper of death", coming from the Greek god of death Thanatos and the Greek word "theristes", which means "reaper" or "harvester". The name was suggested by Amanda Hendrix, a master's student in the same research group, which is led by Professor Darla Zelenitsky, who co-authored the study, CBC said. The second part of the name - degrootorum - reportedly honors the two ranchers who found the fossil, John and Sandra De Groot of Hays,  as they were walking along the shoreline of the Bow River in 2010.

"This animal would have absolutely been an imposing creature in the ecosystem that it lived in and it would very likely have been the apex predator [...] It was really nice to have some sort of name that encapsulated that kind of behaviour", Voris said, cited by CBC.

According to the media report, Voris came across the new tyrannosaur species while doing research on a different species of the ancient creature. Voris reportedly realized that this dinosaur was like no other tyrannosaur he had seen before and the fossils of the ancient reptile came from a rock formation where no tyrannosaurs had previously been positively identified.

© CC BY 2.0 / Travel Manitoba/ Flickr
'T-Rex of the Deep' Gets Discovered by Miners in Canada
According to Voris, cited by CBC, one of the unique features that helped prove its existence are the unusual ridges on the specimen's upper jaw. The unearthed remains reportedly contain mostly broken fragments of the dinosaur's jaws, but researchers suggested that the skull was originally intact.

The entire skull reportedly fell out of the riverbank - where the new tyrannosaur species was found - and most of the bones were washed away before the fossil remains were discovered.

Voris said that newly discovered tyrannosaur was as long as two cars lined up bumper to bumper and would have towered over an adult human. The "reaper of death" stood some 2.4 meters tall at the hips.

The "reaper of death" is reportedly the first new tyrannosaur species found in Canada in 50 years.