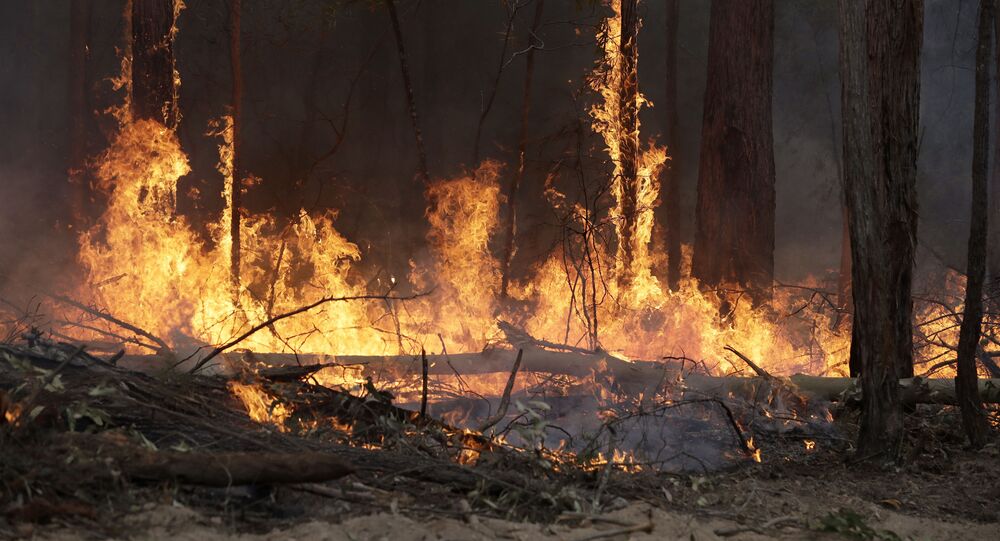 Australian firefighters said Monday that the large “megafire” with an area of around 1.5 million acres, which formed along the border between the Australian states of Victoria and New South Wales last week, is finally under control. However, the rainfall forecast for next week is unlikely to put out the hundreds of remaining fires.

The megablaze formed near Tooma, a village community in the eastern part of the Riverina and southwest of Canberra, last week. On Monday, New South Wales Rural Fire Service Commissioner Shane Fitzsimmons commented on the enormous fire, noting that there was a "small area of burning still to complete" but that the "containment prognosis looks promising,” AFP reported.

​According to Australia’s Bureau of Meteorology, some parts of the country could see up to 50 millimeters of rain next week, which could greatly dampen some of the fires. As of Sunday, at least 120 fires continue to burn across the state of New South Wales alone, with 40 of them uncontrolled.

"It will absolutely bring a bit of relief this week for the community. But in saying that, we want people to remain vigilant, these fires are certainly not out,” she added.

​The New South Wales Rural Fire Service also tweeted Monday that if the rainfall forecast “comes to fruition then this will be all of our Christmas, birthday, engagement, anniversary, wedding and graduation presents rolled into one.” However, New South Wales Rural Fire Service spokesperson Anthony Bradstreet warned that the rainfall is unlikely to put out all the fires.

​“With the period of drought we’ve experienced, we’d need to get extended periods of consistent rainfall in order to get the moisture content up enough for it to put out fires … which is unlikely,” Bradstreet told the Guardian.

Last week, ecologists at the University of Sydney estimated that nearly half a billion animals, including reptiles, mammals and birds, have been wiped out by Australian bushfires since September. The blazes have killed at least 27 people, destroyed more than 2,000 homes and burned down around 11 million hectares of land.

Australia’s beleaguered animals got some assistance Monday, as thousands of sweet potatoes and carrots were dropped from helicopters in New South Wales as part of a campaign that has been dubbed Operation Rock Wallaby. The wallaby, which is a macropod native to Australia and New Guinea, was endangered before the wildfires. With their habitat destroyed, wallabies are now under additional threat. As a result, national park staff members plan to keep providing food and carrying out “intensive feral predator control” until the wallabies’ habitat returns to normal.

​"The wallabies typically survive the fire itself, but are then left stranded with limited natural food as the fire takes out the vegetation around their rocky habitat," Matt Kean, the New South Wales minister for energy and environment, is quoted as saying, according to Reuters.

“This has been an ecological disaster, a disaster that is still unfolding,” Australian Treasurer Josh Frydenberg told reporters on Monday at the Port Macquarie Koala Hospital in Port Macquarie, Australia, where 45 koalas were being treated for burns.

Around 30,000 people attended a Friday protest in Sydney to criticize how the Australian government, particularly Prime Minister Scott Morrison, has handled the crisis. Morrison on Friday rejected a connection between the fires and climate change.

"The scientific evidence base shows that as the world warms due to human-induced climate change, we experience an increase in the frequency and severity of extreme weather events," Australian Academy of Science President John Shine said in a statement last week.

"As a nation, we must deal with extreme weather events more effectively than we currently do,” Shine added.