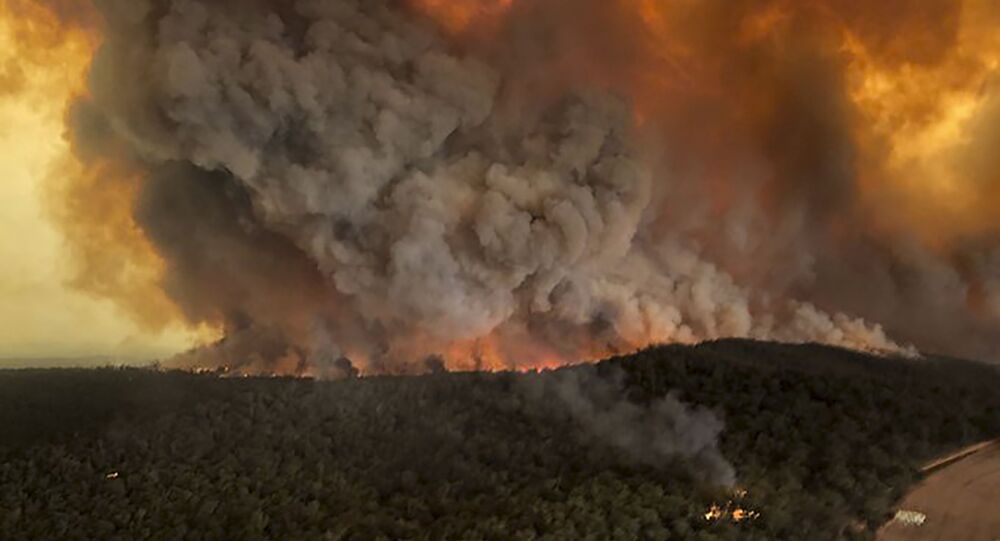 The fires in Australia took a turn for the worse on Friday, as two fires merged into one, forming a “megablaze” with an area of around 1.5 million acres, which is roughly the size of the US state of Delaware.

The megablaze formed along the border between the Australian states of Victoria and New South Wales and merged near Tooma, a village community in the eastern part of the Riverina and southwest of Canberra, the Sydney Morning Herald reported.

​“What we’re really seeing with a number of these fires merging is a number of small fires started by lightning strikes, across the landscape,” New South Wales Rural Fire Service spokesperson Anthony Clark is quoted as telling the Sydney Morning Herald. “And as they grow, we see fires merging.”

​According to experts, the megablaze may have been fueled by strikes of dry lightning, which is when lightning occurs without much precipitation.

This is not the first megafire that has formed since Australia began battling bushfires in September. The Gospers Mountain Fire near Sydney is also the culmination of multiple fires merging together.

​So far, the Australian bushfires have killed at least 26 people, destroyed more than 2,000 homes and burned down around 10 million hectares (100,000 square kilometers) of land.

On Friday, around 30,000 people attended a protest in Sydney to criticize how the Australian government, particularly Prime Minister Scott Morrison, has handled the crisis. Morrison on Friday also rejected the connection between the fires and climate change.

​“The suggestion that there’s any one emissions reduction policy or climate policy that has contributed directly to any of these fire events is just ridiculous and the conflation of those two things, I think, has been very disappointing,” he added.

The fires have had devastating effects on Australia’s ecosystem and air quality.

Last week, ecologists at the University of Sydney estimated that nearly half a billion animals, including reptiles, mammals and birds, have been wiped out by Australian bushfires since September. In addition, the fires and associated smoke and dust have resulted in extremely high air pollution in the country. In December, the particulate level in Sydney’s air was around 50 micrograms per cubic meter of air, which is much higher than the 12 micrograms per cubic meter of air threshold that’s been determined as safe by the US Environmental Protection Agency.