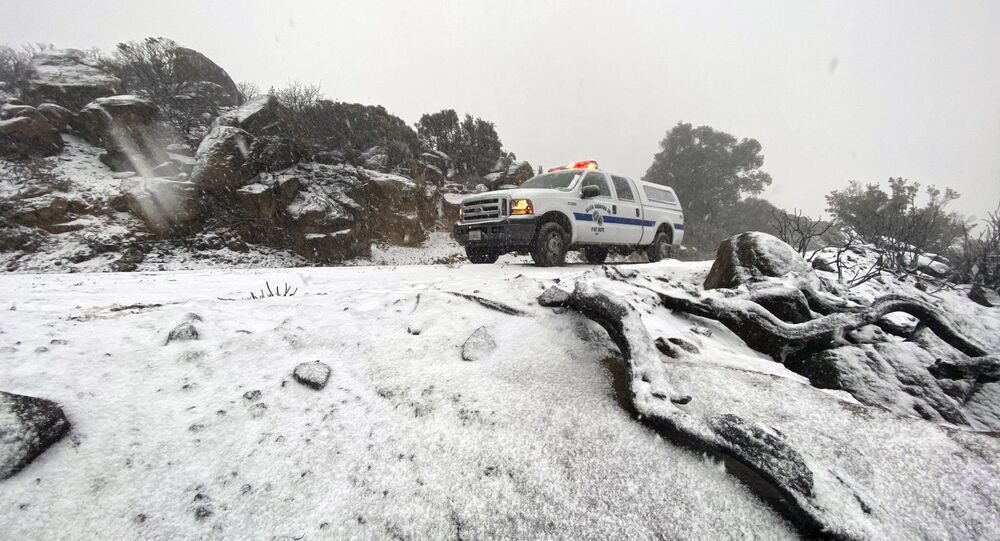 A winter storm, dubbed Ezekiel, has already already dumped more than a foot of snow across an area of the Northeast US, from Pennsylvania to New Jersey, New York and New England, and conditions are expected to worsen.

According to Weather.com, winter storm warnings and winter weather advisories have been issued by the National Weather Service for around 50 million people from Maine to the central and southern Appalachians.

​Snow and gusty winds are expected to affect morning commutes in eastern New England and the New York City tri-state area Tuesday. Ice is also expected to accumulate in parts of Pennsylvania.

"An accumulation of a coating to an inch or so is possible around Philadelphia," AccuWeather senior meteorologist Alex Sosnowski said. "Up to a few inches may fall on the New York City area, with several inches likely around Boston."

​Winter Storm Ezekiel first hit southern Oregon and northwestern California as a bomb cyclone last Tuesday before moving across the West, Plains and upper Midwest regions between November 27 and 30. A winter storm is called a bomb cyclone if it undergoes bombogenesis, a process in which the storm’s minimum central pressure drops by at least 24 millibars within 24 hours. In this case, the storm’s minimum central pressure dropped by 43 millibars in 24 hours.

​Schools across New York were closed Monday, and non-essential state employees were advised to stay home from work.

​“With the forecast predicting snow just in time to create a messy evening commute, I urge all New Yorkers to take extra precautions, stay off the streets and take public transportation whenever possible,” New York City Mayor Bill de Blasio announced Monday. “Everyone must do their part."

LIVE: Eastern US states & Canadian provinces experiencing #WinterStormEzekiel right now, with many events cancelled and many flights too.

​More than 7,500 flights into or out of the US have also been delayed over the past day, according to FlightAware.com.