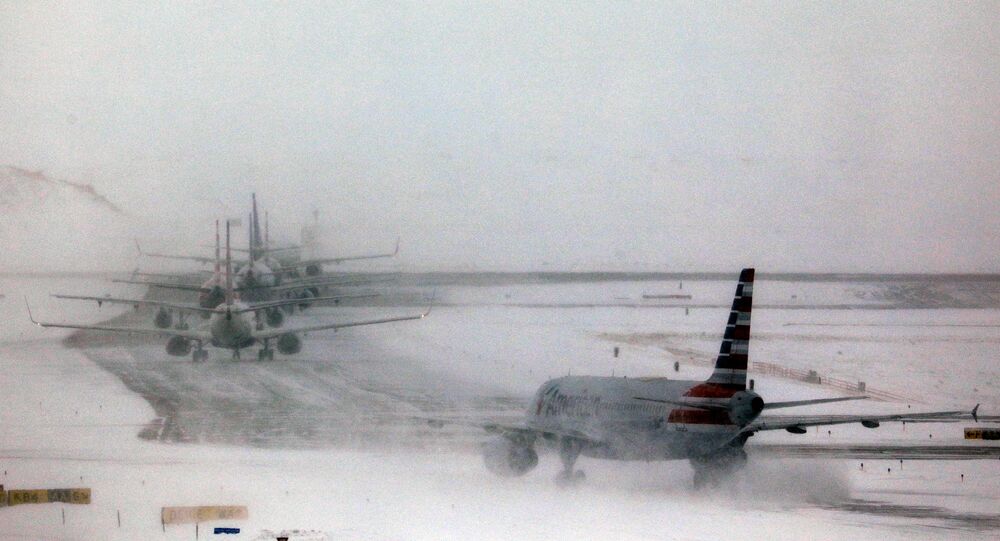 Before thousands of travelers across the US will be able to chow down on their Thanksgiving spread come Thursday, they’ll first have to fight their way through massive traffic delays and be able to manage weather-induced headaches, thanks to Mother Nature’s newly unleashed wrath.

Filled throughout with pink, purple and blue hues, the National Weather Service’s (NWS) map has highlighted multiple freeze and winter storm warnings and advisories across the US’ northern border with Canada and nearly the entirety of the US West Coast.

The slew of warnings and advisories are the result of two massive storms slamming the US with snow, rain, and strong winds which have already caused power outages for thousands of residents in Oregon and California.

​The Los Angeles Times reported that the cold front currently striking the Golden State has dropped between half an inch and 2 inches of rain in the San Francisco Bay area, noting that flash flood warnings have already been issued by the NWS.

​“The first storm will be a strong surface low tracking eastward across the Great Lakes on Wednesday and then towards New England by Wednesday night,” the NWS explained in a post. “Given the tight pressure gradient with this low pressure system, very windy conditions are likely across much of the Midwest and Ohio Valley region where winds could gust in excess of 50 mph at times.”

​“Another storm that will be highly impactful across the western US reached the Oregon Coast Tuesday evening as a low pressure record setter for the month of November, with a central pressure near 970 mb! It is now beginning to gradually weaken as it moves inland towards the Great Basin,” the post continues.

“The Sierra Nevada mountains are likely to get hammered with blizzard conditions, and heavy snow is also expected towards the east to include the northern Rockies, Wasatch Range, and the San Juan Mountains of Colorado.”

​Additionally, the NWS stated that areas under winter storm watches and warnings may potentially receive up to three feet of snow. In Minnesota, the latest snowfall totals reported by local news station WCCO indicates that the highest measurement was detected in Waseca, whose residents were hit with 11 inches of snow.

​Over in nearby Colorado and Nebraska, folks saw up to 3 feet and nearly 10 inches of snow, respectively. Citing an NWS meteorologist, the Omaha World-Herald reported that people living within central Nebraska were mostly recipients of a “second wave of snow” that blew in from out of Denver.

​And that’s not all, folks. Elsewhere in the nation, from the US’ southeastern, mid-Atlantic and New England states, residents will have to endure a few thunderstorms before a cold front - that will also bring in loads of rainfall - is due to roll into town.

The southern state of Mississippi even experienced an overnight tornado that damaged dozens of homes and knocked down multiple trees. No reports of injuries have surfaced yet.

​"I put on my clothes and stepped outside. It was about 12:15 a.m.," Emmett Clark, a resident of the Magnolia state’s Star community, told the Mississippi Clarion Ledger. "I couldn't believe it. I'm glad my house was OK but I feel for everybody else in the neighborhood. I got off lucky.”

With all the reported weather madness, it’s no surprise that an already busy pre-Thanksgiving travel day will be even more deadlocked for some travelers. The NWS reported that the weather events were certain to cause “severe travel disruptions” ahead of the holiday.

​The American Automobile Association(AAA) has estimated that more than 55 million travelers will be braving traffic in an effort to kick of their holiday season. The not-for-profit organization has indicated that 2019 Thanksgiving travel volume will likely be the “second-highest” on record since the agency first began tracking the figures in 2000.

AAA reported that the worst travel time for many will be on Wednesday roughly between the hours of 2 p.m. and 7:30 p.m, depending on the city. The organization predicts that in many cities, such as San Francisco, Chicago and New York,  travel times will be 3.5 times as harder to maneuver.