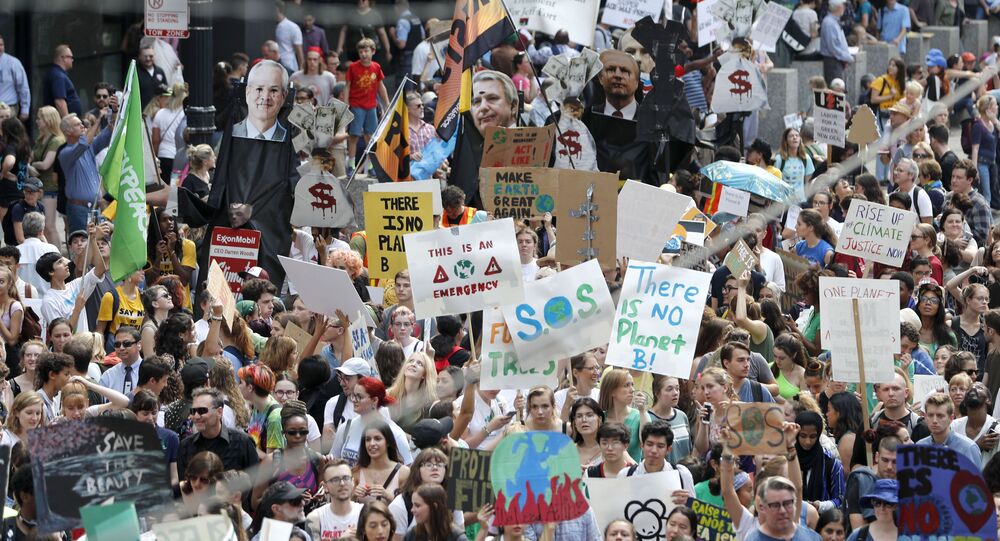 Thousands of people in the US are marching between September 20 and 27 as part of the Global Climate Strike, a worldwide movement demanding that politicians take action to combat the growing climate crisis.

According to its website, the Global Climate Strike movement, which was inspired by 16-year-old Swedish climate activist Greta Thunberg last year, is meant to embody the stance that “people are no longer willing to continue with business as usual” when it comes to the environment.

​“The urgency of the climate crisis requires a new approach and a just response centered on human rights, equity, and justice,” the website adds.

On Friday, multiple demonstrations in the US were underway. In New York City, around 100,000 New Yorkers congregated at Foley Square in Lower Manhattan, prompting the New York Police Department to close down some of the streets in the area.

​At least 200 protesters showed up at the City Hall in St. Petersburg, Florida, while some roads in Baltimore, Maryland, were shut down as students showed up for the protest on scooters and skateboards, the New York Times reported. In Des Moines, Iowa, at least 500 people convened outside the State Capitol building, the Times reported, while thousands of students in Washington, DC, marched to a rally outside Capitol Hill. Protesters in San Francisco, California, are expected to congregate for a march at the local office of Speaker of the House Nancy Pelosi.

​In a statement to USA Today, Isabella Johnson, a high school student who organized the protests in Chicago, said the protesters’ goal is to pass a proposed bill in Illinois for a Clean Energy Jobs Act, which proposes that the state exclusively turn to renewable energy by mid-century

​“I want this country's leaders to realize that the youth will not back down, we will strike and strike and strike until they take action," Johnson is quoted as saying. "And if they refuse to take action that would ensure my generation a healthy future, then we will vote them out of office first chance we get.”

Friday’s strike is not limited to students: more than 1,500 Amazon employees across the US plan to walk out after months of urging the multinational technology company to establish a comprehensive climate plan that involves the complete shift to renewable energy by 2030, according to the Times.

​Although Amazon CEO Jeff Bezos released a climate plan Thursday to decrease carbon emissions and implement renewable energy initiatives, Amazon employees are calling for more aggressive measures. The employees are using their vacation days to participate in the marches, Fortune reported. Google, Facebook and Twitter employees also plan on participating in the strike.

While protests are underway in the US, thousands of others in countries across the world are participating in the demonstrations as well. Protests have taken place in Afghanistan, Australia, Bangladesh, Belgium, China, France, Germany, Greece, India, Indonesia, Japan, the Netherlands, Nigeria, Pakistan, the Philippines, Poland, South Africa, Thailand, Ukraine and the United Kingdom.