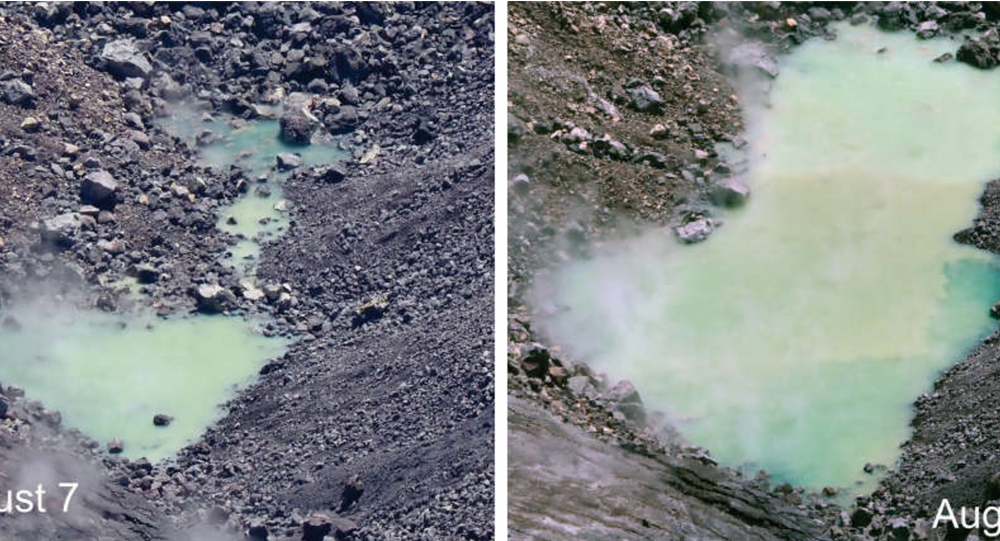 An ever-expanding pool of water inside a crater at the summit of Hawaii’s Kīlauea volcano has baffled scientists for over a month and is the subject of a number of theories about the liquid’s origin and what it may mean for the volcano and active crater.

Kīlauea’s active summit crater Halema'uma'u has been steadily accumulating water for over a month, and the United States Geological Survey’s (USGS) Hawaii Volcano Observatory (HVO) has been monitoring the phenomenon.

"We got a temperature of about 70C (160F) using a thermal camera but that is probably a minimum due to atmospheric absorption of thermal energy between the lake and the camera," HVO geophysicist Jim Kauahikaua told Newsweek.

The finding is particularly exciting and concerning at the same time, as Kīlauea has never been known to have a crater lake in its recorded history. In August, Sputnik reported that experts had confirmed reports of the green patch of boiling water after a helicopter pilot first spotted the unusual phenomenon weeks prior.

"For the last month, since the water was first observed, the water level has been steadily rising, so we strongly suspect that it will continue to rise," Kauahikaua also told the outlet.

"Evidence so far is pointing toward the lake being part of a rising water table, possibly rebounding from being depressed by the collapse events of 2018.”

Laser rangefinder measurements by the HVO indicate the water continues to rise at a rate of nearly 1 meter per week.

Last year, the 2018 USGS National Volcanic Threat Assessment reported that the Kīlauea volcano experienced its largest eruption in 200 years in an event that lasted between May and August, covering some 13 square miles in lava flows.

"On August 7, the main pond was about 15 meters wide and separated from two smaller ponds; by the next day, the water level has risen enough that all three ponds were joined. On August 23, the single elongate pond was about 35 meters wide and about 80 meters long — and still growing,” the HVO announced on Monday with accompanying photos taken by HVO scientist emeritus Don Swanson.

Though water has never before been seen within the volcano, Scott Rowland, a geologist in the University of Hawai‘i at Manoa’s Department of Earth Sciences, says that Hawaiian legend makes “mentions of water in Halema‘uma‘u, associated with explosions and Pele and Hi‘iaka.”

Kauahikaua told Newsweek that things could get messy if the surface water meets rapidly rising magma following the next eruption, but the pool poses no threat at the current moment due to its low level.

"The presence of surface water interacting with rapidly rising magma during the next eruption may lead to minor explosions; however, these are not expected to increase the hazard to the public at this time,” he noted. Depending on the source of said water, the pit has the potential to reach 230 feet in depth.

The USGS continues to monitor the volcano via its panoramic “K3cam.”

Where Not to Live: USGS Details 18 Current ‘High-Risk’ Volcanoes