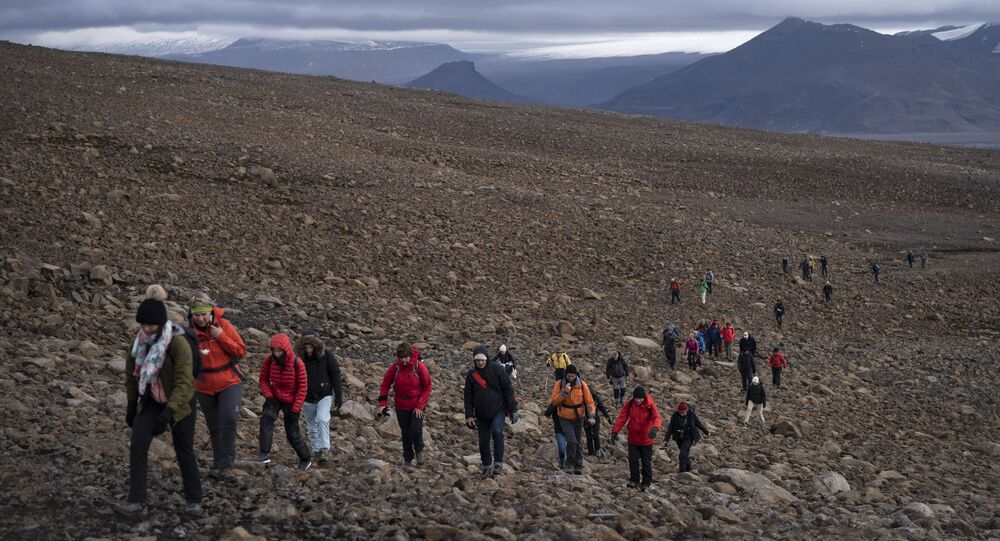 People gathered Sunday in Borgarfjörður, Iceland, a fjord in the west of island nation near the town of Borgarnes, to mourn the loss of Okjokull (Ok), an Icelandic glacier no longer thick enough to be considered a glacier.

The glacier was officially declared dead by glaciologist Oddur Sigurðsson in 2014, when he noticed that the glacier’s snow was melting faster than the accumulation rate.

“It didn't have enough mass of snow and ice in order to be able to crawl along the ground, which is required of a glacier to be able to move under its own weight,” Cymene Howe, an associate professor of anthropology at Rice University, is quoted as saying by radio station WBUR. To build up enough pressure to move over time, a glacier has to be between 130 and 165 feet thick.

An estimated 100 people gathered on Sunday morning at the location of what remains of the ice formation, atop the Ok shield volcano northeast of the Icelandic capital of Reykjavik, to mourn the country’s first lost glacier. In Icelandic, “jokull” means glacier, so when the ice formation ceased to be a glacier, that part of its name was dropped, leaving only the name of the volcano on which the last of the ice remains.

A plaque titled “A letter to the future,” which includes text in both English and Icelandic, was placed at the volcano to commemorate the loss.

“Ok is the first Islandic glacier to lose its status as a glacier. In the next 200 years all our glaciers are expected to follow the same path. This monument is to acknowledge that we know what is happening and what needs to be done. Only you know if we did it,” the plaque reads.

“By marking Ok’s passing, we hope to draw attention to what is being lost as Earth’s glaciers expire. These bodies of ice are the largest freshwater reserves on the planet, and frozen within them are histories of the atmosphere. They are also often important cultural forms that are full of significance,” Howe, who was one of the scientists who mourned the loss Sunday, is quoted as saying by multiple sources.

Howe also noted that the plaque is intended to serve as a reminder that climate change was caused by humans.

“By memorializing a fallen glacier, we want to emphasize what is being lost or what is dying,” Howe said. “And we also want to draw attention to the fact that climate change is also something that humans have accomplished, if you will, although it's not something that we should be particularly proud of.”

A study in the journal Nature published in April 2019 found that the world’s glaciers lost more than 10 trillion tons of ice between the years 1961 and 2016.

“Present mass-loss rates indicate that glaciers could almost disappear in some mountain ranges in this century, while heavily glacierized regions will continue to contribute to sea-level rise beyond 2100,” the study concludes.