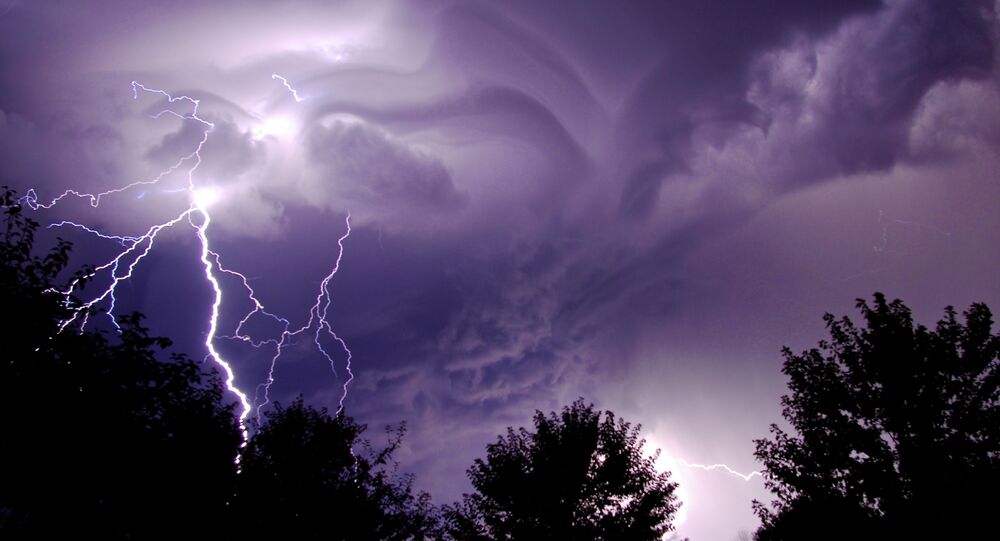 There was enough unstable, warm, moist air in the Earth’s upper latitudes over the weekend to produce thunderstorms above the Arctic Circle, including lightning bolts that struck the surface within 300 miles of the North Pole. That’s not unprecedented, but it is rare, and the conditions that enabled it are a product of climate change.

Saturday thunderstorms in the far north produced lightning strikes within 300 miles of the North Pole, the National Weather Service in Fairbanks, Alaska, reported. The location was roughly 700 miles north of the Lena River delta, a Siberan river that flows north into the Arctic Ocean.

“This is one of the furthest north lightning strikes in Alaska forecaster memory,” the NWS stated, noting on its Facebook page that “this was a rare event.”

A number of lightning strikes were recorded Saturday evening (Aug. 10th) within 300 miles of the North Pole. The lightning strikes occurred near 85°N and 126°E. This lightning was detected by Vaisala's GLD lightning detection network. #akwx pic.twitter.com/6jdxeMPBdH

The strikes were recorded by the National Lightning Detection Network, a group of over 100 ground-based sensing stations managed by Finnish company Vaisala, which verified the strikes tracked with thunderstorm cloud formations across the region, proving they weren’t false positives.

“Saturday's lightning strikes near the North Pole were most likely from elevated thunderstorms, which develop when there is a layer of unstable air in the middle portion of the atmosphere,” the Weather Channel said, noting that this was in contrast to mid-latitude summer storms, which form when “the sun's heating of the Earth's surface making the atmosphere grow unstable at lower altitudes.”

The Weather Channel noted that most lightning occurs at lower latitudes, “where the warm and unstable conditions needed to form thunderstorms are most often found.” For these conditions to appear in the far north is unusual. However, those unusual conditions are becoming more and more common.

This past May, the Russian city of Archangelsk, which sits on the White Sea just 2 degrees south of the Arctic Circle, hit a balmy 84 degrees Fahrenheit (29 degrees Celsius).

​The National Weather Service reported earlier this month that Alaskan waters were “ice-free,” with Rick Thoman, a climate specialist at the Alaska Center for Climate Assessment and Policy, telling Mashable that "it's cleared earlier than it has in any other year.”

The Washington Post noted that in July alone, enough of the Greenland ice sheet melted to pour another 197 billion tons of water into the North Atlantic, which by itself raise sea levels by 0.02 inches.

The US National Oceanographic and Atmospheric Administration (NOAA) reported in 2017 that “the magnitude and pace of the 21st century sea-ice decline and surface ocean warming is unprecedented in the last 1,500 years.”

​Wildfires are raging out of control across the region as well, with warm, dry conditions encouraging their spread. Fires raged in Alaska, Canada’s Yukon territory and Russia’s Krasnoyarsk Krai and Sakha Republic last month, and Greenland has seen “unprecedented” wildfire activity this summer.

While these regions sometimes see summer burns, they’re appearing further north, burning more and burning longer than ever before.

Fueled by climate change, those fires are, in turn, pouring even larger amounts of carbon dioxide into the atmosphere, which is the primary greenhouse gas driving that dynamic. The Copernicus Atmospheric Monitoring Service (CAMS) reported that Greenland wildfires in June alone ejected more carbon dioxide than the country of Sweden does in an entire year.