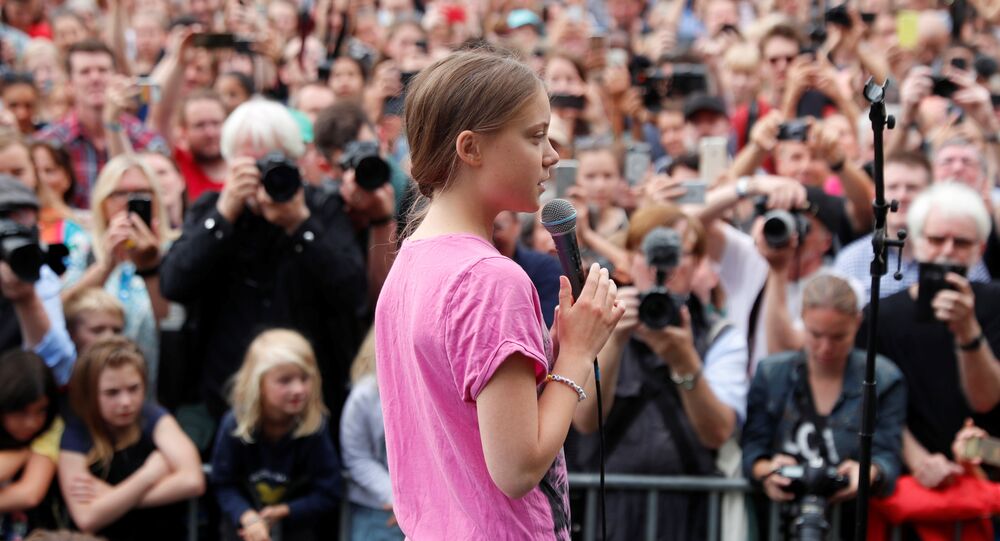 Flying across the Atlantic only takes about eight hours. Sailing, by contrast, takes about three weeks and has prompted the underage “climate prophet” to take a sabbatical from school.

Climate activist and Nobel Peace Prize nominee Greta Thunberg has figured out how to get to the US in the most eco-friendly of ways; she has been offered a seat on a racing boat.

“Good news! I’ll be joining the UN Climate Action Summit in New York, COP25 in Santiago and other events along the way. I’ve been offered a ride on the 60ft racing boat Malizia II. We’ll be sailing across the Atlantic Ocean from the UK to NYC in mid- August”, the teenage activist, sometimes branded a doomsayer, tweeted.

Good news!
I’ll be joining the UN Climate Action Summit in New York, COP25 in Santiago and other events along the way.
I’ve been offered a ride on the 60ft racing boat Malizia II. We’ll be sailing across the Atlantic Ocean from the UK to NYC in mid August.#UniteBehindTheScience pic.twitter.com/9OH6mOEDce

The Malizia II's crew agreed to sail Thunberg to the US for free for the sake of the environment.

"Greta's mission is one we strongly support and believe in, Greta is an ambassador who delivers a fundamental message both for our society and for the survival of future generations, and we are honoured to be able to take her to America to continue her work", team Malizia wrote on Instagram, posting a picture of Greta's "school strike" that propelled her to international stardom.

Team Malizia - skippered by Pierre Casiraghi and @borisherrmannracing will be sailing @gretathunberg emission free across the Atlantic for the UN Climate Action Summit this August. Greta’s mission is one we strongly support and believe in, Greta is an ambassador who delivers a fundamental message both for our society and for the survival of future generations and we are honoured to be able to take her to America to continue her work. #UniteBehindTheScience #gretathunberg #fridaysforfuture #climateactionnow #aracewemustwin #teammalizia

Earlier in May, Greta Thunberg was invited to two different climate meetings on the other side of the Atlantic, one in New York, US, and the other in Santiago, Chile.

Back then, Thunberg explained to the Swedish daily Dagens Nyheter that she was at a loss at how to cross the Atlantic, as she doesn't consider flying a sustainable option. Sailing across the Atlantic takes about three weeks. Flying takes just about eight hours. Her seaborne voyage to the Americas will take so long that she has arranged a sabbatical from school.

Partly owing to Thunberg's relentless campaigning the Swedish word 'flygskam' (which translates as "flight shame") has become a pan-European movement that encourages people to stop flying to lower carbon emissions and promotes means of transportation that are considered more eco-friendly, such as trains.

In Sweden, this movement has spawned a bunch of buzzwords, increasingly popularised by media and influencers who purport to have given up flying, including Thunberg's own mother opera singer Malena Ernman. These concepts include 'tågskryt' ("train boasting"), 'tågsemester' ("train holiday") and even 'smygflyga' ("fly on the sly").

Greta Thunberg has risen to stardom with her weekly "school strikes for the climate" held outside the Swedish parliament, which have grown to encompass hundreds of thousands of students across the globe.

In Scandinavia and a large part of Europe, Thunberg has harvested numerous awards and is revered by the political establishment and the mainstream media, despite being the perennial victims of her attacks. At merely 16, Thunberg has featured on the cover of Time magazine, has been nominated for the Nobel Peace Prize, and was appointed woman of the year by several major newspapers. Still, her stance is not without controversy, as many believe the 16-year-old diagnosed with Asperger's and OCD, is being exploited for political gain.

Recently Thunberg added more controversy to her name by posing in a T-shirt with radical left-wing Antifa movement imagery and calling for a national strike for the sake of the climate.