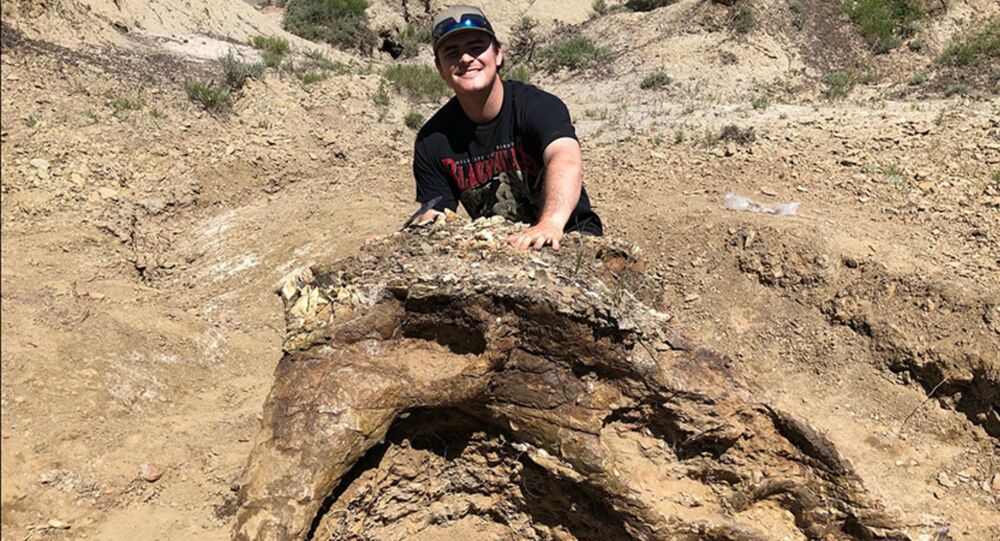 A paleontology dig proved to be a major success for an undergrad college student after he uncovered the partial skull of a Triceratops that roamed during the Cretaceous period, the longest portion of the Mesozoic Era.

Harrison Duran, a biology student at the University of California, Merced (UC Merced), unearthed the find of a lifetime while accompanying Mayville State University professor and professional excavator Michael Kjelland on a two-week dig in North Dakota’s Badlands last month.

In just the fourth day of the paleontology dig, the fifth-year student, with a concentration in evolutionary biology, uncovered a portion of a skull belonging to a 65 million-year-old Triceratops.

“I can’t quite express my excitement in that moment when we uncovered the skull,” Duran said in a press release published by UC-Merced. “I’ve been obsessed with dinosaurs since I was a kid, so it was a pretty big deal.”

Though Duran and Kjelland were quick to identify what they had stumbled upon, it would take them about a week to fully unearth the find. After recovering the fragile bones from the ground the team is said to have used a “specialized glue” to stabilize the skull before applying an accelerant to bond the find.

The duo named the prehistoric discovery “Alice,” after the owner of the land they were operating on.

Prior to and after Alice’s uncovering, Kjelland and Duran also found fossilized tree leaves and wood, which helps them further understand the environment of the Cretaceous period, which began approximately 145 million years ago and is the last and longest period of the Mesozoic Era.

“My vision is to have Alice rotate locations,” Kjelland said in the UC-Merced release. “The goal is to use this find as an educational opportunity, not just reserve Alice in a private collection somewhere so only a handful of people can see her.”

Duran, also wanting others to witness Alice’s wonder, hopes part of her tour will include the UC-Merced campus.

Alice has since been coated in plaster and wrapped in a memory foam mattress as she awaits delivery to Kjelland’s lab.

UC-Merced, Fossil Excavators
Michael Kjelland poses with "Alice" after she has been treated with foil and plaster for protection.

“There have been people in the past who have stolen dinosaur bones,” Kjelland told the school, explaining the reasoning behind his lab’s undisclosed location.

In April, Sputnik reported on a similar prehistoric uncovering on a farm in Seymour, Indiana. Sewage workers stumbled upon the bones of a mastodon, a massive 9-foot tall, tusk-bearing mammal that went extinct some 10,000 years ago.

According to local outlet IndyStar, the find has been on display at the Indiana State Museum in Indianapolis since late April. Unlike Alice, the mastodon bones will more-than-likely remain a fixture in the museum.

Cyborgs Will Rule Earth by End of the Century, But Won’t Destroy All Humans - Scientist