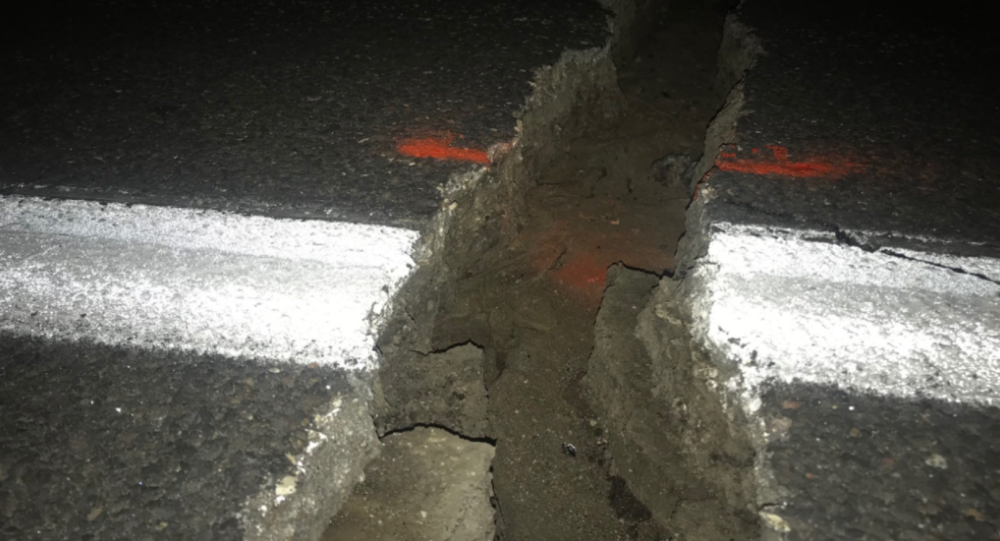 Who would have thought that the latest tourist attraction in Southern California would be a giant fissure?

Satellite images taken by Earth imaging company Planet Labs Inc. and photos shared by California residents this week show the visible crack across the Little Lake fault zone near Highway 178 on the outskirts of Trona in San Bernardino County. The crack was caused by a powerful 7.1-magnitude earthquake Friday, just one day after a 6.4-magnitude quake hit 122 miles northeast of Los Angeles.

​Since the quake, locals, tourists and geologists have convened at Highway 178 between Ridgecrest and Trona to take photos of the surface rupture.

​“I thought it would fare well online,” Christian Flores, 27, who visited the area from San Diego, said in reference to the crack, the Los Angeles Times reported. “I mean, how often do you get an earthquake of this size?”

​Fifty-six-year-old Michelle Binion also decided to see the rupture herself. She drove to the area with her husband from Rancho Cucamonga in San Bernardino County.

“This is absolutely worth the drive,” she told the Los Angeles Times “I think as human beings we like to live on the edge. This fault really shows you just how vulnerable we are.”

​Australian native Heath Williamson, 47, also showed up at the scene with a camera, ready to snap some photos.

“Mother Nature, she is just an amazing force,” Williamson told the outlet, also adding that he hopes that by sharing his photos through social media, people will become more aware of the power of earthquakes.

​"California is like a second home to me," Williamson said. "I'm worried that Los Angeles has become very complacent."

At least 159 aftershocks of magnitude 2.5 or greater were recorded after the first earthquake on July 4, Sputnik reported. However, despite the magnitude of both earthquakes, there were no reported deaths as a result. The quakes did, however, result in several gas leaks and fires in Southern California.