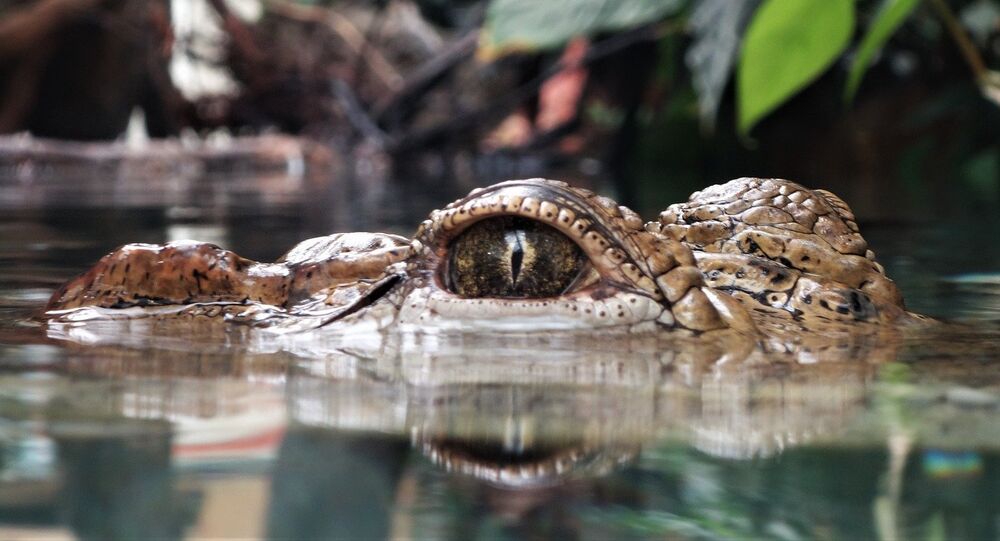 According to social media users, the scaly predator can endure the flesh wound, because its blood "contains antibiotic properties, which speed up the healing process", so the alligator might be feeling pretty well, not batting an eye about the blade sticking out of its head.

An alligator from Texas was spotted calmly swimming in a river with a big kitchen knife stuck right in its head. The footage, captured by Erin Weaver was shared on social media on Friday, shocking numerous users.

"I want to get help for this alligator. I don’t want to see an alligator swimming around with a knife in its head and suffering", she told reporters.

Is it “alive” alive or dead alive? 😳 pic.twitter.com/sldnQylYhQ

While the predator is definitely not very lucky, there seems to be no grave concerns about its condition, as alligators are very tough and their scales provide great protection from such wounds.

Uh. Maybe a knife is stand-up paddle boarding in a Texas lake with an alligator stuck to its foot. C’mon. Use your brain.

The epic reptile, meanwhile, has become really popular on Twitter, with numerous people posting the story about the alligator.

Whosoever pulls this knife from the head of this alligator shall be crowned King of Texas https://t.co/5qVfNusgNg

At the same time, others pointed out that the knife in the predator's head is not a coincidence.

By all means check on the gator, but WHY IS NOBODY WONDERING WHAT BECAME OF THE PERSON WHO FOUGHT THE GATOR WITH A KNIFE!!!!!!????? #HellraiserGator https://t.co/c2KGFm7v0Y

you want me to drive from Washington DC to Texas to pull a knife out of the head of an alligator?

​A Texas wildlife agency also took note of the issue, stating it would begin searching for the alligator next week.

'This is a Job I Would Never Do': Tied-Up Alligator Knocks Trapper Unconscious in Florida