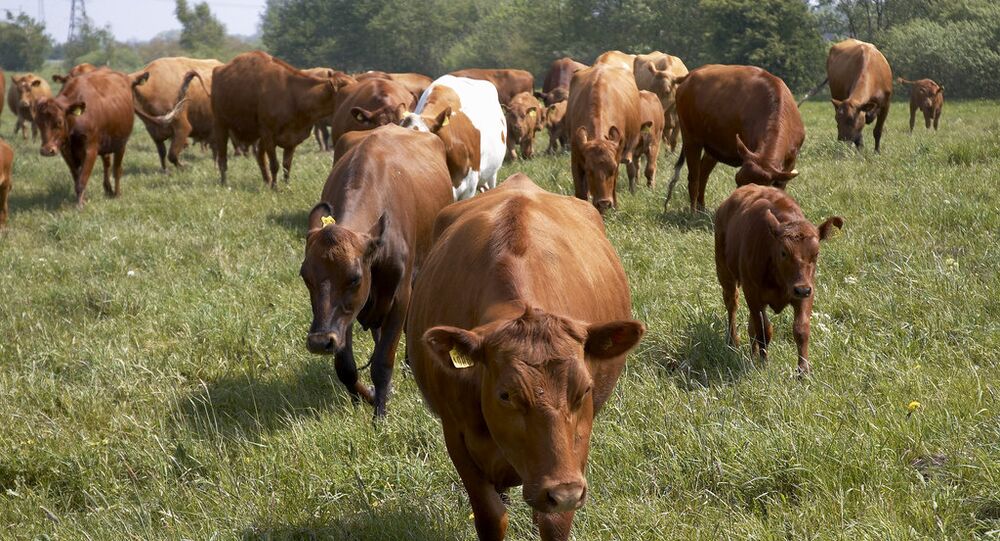 Atmospheric levels of methane - a powerful greenhouse gas - are rising, and scientists can’t figure out why. While scientists seem puzzled by the trend, one expert told Sputnik they shouldn’t be: present warming is driving “feedback loops” that cause natural methane sources to vent the gas.

While the ability of carbon dioxide to trap heat in Earth's atmosphere has become well-known in recent decades, another culprit of climate change is methane — the stuff of cow farts, natural gas and landfills. Methane is 25 times more effective of a greenhouse gas than carbon dioxide, and it stays in the air almost twice as long.

The sources of carbon dioxide are well-known, too, with the burning fossil fuels like coal and petroleum being the largest sources. However, methane is a bit more mysterious. That's what makes its steadily increasing levels since 2007 disconcerting: scientists can't seem to figure out where it's coming from.

A study published in March in the journal Global Biogeochemical Cycles noted that between 2014 and 2017, the already-accelerated pace of methane release picked up even more.

"The causes of the rise are not fully understood, and may include increased emissions and perhaps a decline in the destruction of methane in the air," the scientists wrote. "Methane's increase since 2007 was not expected in future greenhouse gas scenarios compliant with the targets of the Paris Agreement, and if the increase continues at the same rates it may become very difficult to meet the Paris goals. There is now urgent need to reduce methane emissions, especially from the fossil fuel industry."

"There are so many hypotheses and high impact papers out just in the last two years that cover the whole range of explanations for why there's this renewed growth," Benjamin Poulter, a NASA researcher and contributor to the Global Carbon Project, told Undark for a May 13 article.

© Sputnik
Is There a Connection Between Meat Consumption and Climate Change?

Some of the possibilities include wetlands — which contribute 30% of global methane emissions by themselves — as well as rivers and lakes, wildfires, termites, geological seeps and thawing permafrost.

Plus, Lori Bruhwiler, a research scientist with the US' National Oceanic and Atmospheric Administration (NOAA), told Undark that "almost everything we humans do has an effect on the methane budget, from producing food to producing fuel to disposing of waste."

"The increasing methane levels should not come as a surprise," Frederick Magdoff, professor emeritus of plant and soil science at the University of Vermont and co-author of "What Every Environmentalist Needs to Know About Capitalism: A Citizen's Guide to Capitalism and the Environment," told Sputnik Monday.

"One of the feedback loops that occurs as the earth warms is the thawing of the permafrost, which is already happening. As this frozen soil thaws out, both CO2 and methane (CH4) are emitted," Magdoff explained. "Adding to this, there is another source that humans are contributing directly: with the incredible amount of hydraulic fracturing (fracking) occurring, both oil and gas are frequently found, but the pipeline infrastructure may be in place for the oil but not to deal with the gas. This gas then just leaks out or is flared (burned). Even traditional oil and gas wells may leak natural gas."

Indeed, in the study the scientists wrote, "If the increased methane burden is driven by increased emissions from natural sources and if this is a climate feedback — the warming feeding the warming — then there is urgency to reduce anthropogenic emissions, which we can control."

The 2015 Paris Climate Agreement attempted to hold countries to a pledge to reduce global emissions of carbon dioxide such that man-made climate change is limited to a mere 2-degree-Celsius increase, but encouraged them to aim for a 1.5-degree increase. However, the goal of a reduction in global carbon levels — and the strategies for achieving it — weren't made with methane in mind. It seems now we will have to reevaluate those targets and methods in light of new information.