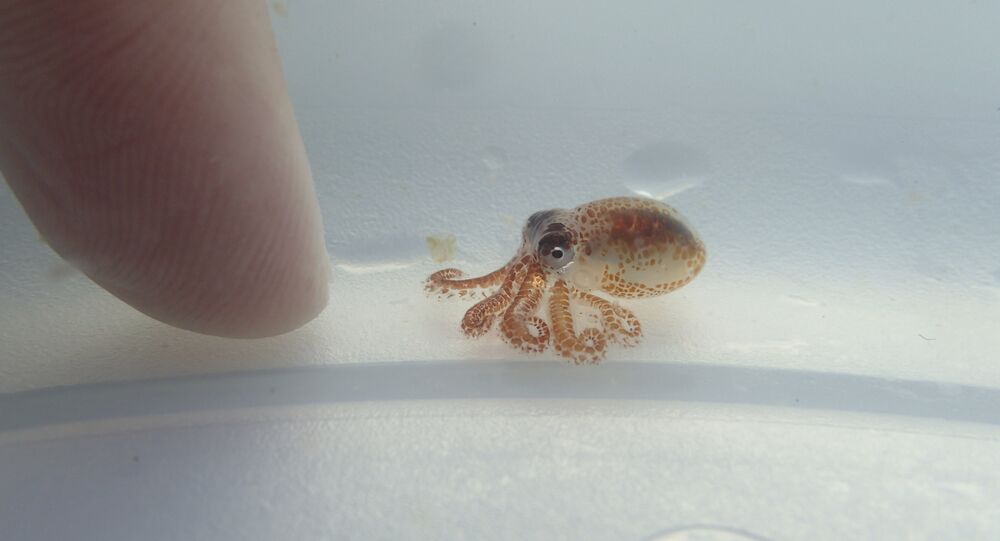 Farming octopus is “unethical and a threat to the food chain” according to a new study, noting also that it is ecologically unjustified to mass breed the highly-intelligent aquatic creatures.

© Photo : animalsprestiges/instagram
Public Transport is Full of Surprises: Gaggle of Geese Ride London Bus
An international group of researchers in a new study has lambasted plans to set up octopus farming facilities in coastal waters around the globe, according to The Guardian.

At once both ecologically deadly and morally reprehensible, the scientist have called on nations, private enterprise and academia to stop funding and tax breaks for octopus farming, citing new evidence that the creatures are not only highly intelligent but also an integral part of coastal ecosystems.

Not only would the practice require penning the octopus in restrictive environments, it would also use enormous amounts of shellfish and other fish to feed them, further pressuring the Earth's rapidly dwindling marine livestock preserves.

Led by New York University professor Jennifer Jacquet, the group concludes that not only are octopuses highly intelligent and curious animals, but the farming of the species would kill a high percentage of the caged creatures, due to stress.

© AP Photo / Natacha Pisarenko
Walls Come Down: Indian Court Rules Against Forest Barrier Obstructing Elephants
"We can see no reason why, in the 21st century, a sophisticated, complex animal should become the source of mass-produced food," Jacquet explained, cited by the Observer.

"Octopuses eat fish and shellfish, and supplying enough to feed large numbers of them puts further pressure on the food chain, she added.

"It is unsustainable. Octopus factory farming is ethically and ecologically unjustified."

The planet's oceans currently support about 300 species of the gangly sea creature, and studies have shown that many "behave in surprisingly sophisticated ways," cited by the Guardian.

Octopuses have been documented using tools and scientists have also observed the eight-tentacled wonder constructing coconut-shell shelters underwater to protect their young.

"Once octopuses have solved a problem, they retain long-term memory of the solution," researchers noted in the study published recently in Issues in Science and Technology.

"Why should research money be used to support a project that will have so many welfare and environmental problems?" suggested one of the report's researchers, cited by the Guardian.

Unfortunately, octopuses are a legacy foodstuff for several cultures and an estimated 350,000 tonnes are swept up by nets annually for tables in countries as diverse as Australia, Japan, Spain, Mexico and Chile.

Efforts to use fertilized eggs taken from females in the wild have seen poor results, however, as octopus larvae will only eat living food, rapidly raising the price of farming operations. Controlling temperature and salinity so that the young can survive is also expensively problematic, according to reports.

Economic challenges presented by raising octopuses in farms has kept the practice from gaining ground until farmers recently discovered that certain species of the animal are not as fussy, prompting a quick shift to promoting the ecologically problematic practice.

Several companies, including Japanese seafood company Nissui, have been reported to be successfully hatching octopus eggs in farming facilities while projecting the sale of ready-to-eat octopus meat by 2020. Seafood firms in Australia and Mexico also report distributing farmed octopus meat to stores over the next year, according to The Guardian.

© REUTERS / @JuanSharks/@OceanRamsey/Juan Oliphant/oneoceandiving.com
WATCH: Divers Near Hawaii Swim With ‘World's Largest' Great White Shark
The corporate rationalization for farm-grown octopus is poor, notes study principal Jacquet, as Europe, Japan, the US and China are global regions that are not suffering famine, particularly as the tissue of the octopus is a delicacy, not a staple required for a population's survival, she noted.

Many octopus farms remain in development, however, and the study notes that institutions — including governments and business — must refuse to fund these ecologically unsustainable and ethically wrong projects.

"When universities and research institutions consider supporting these projects — and that is beginning to happen now — it will make sense to object," stated Sydney University's Peter Godfrey-Smith, a co-author of the paper.

"Why should research money be used to support a project that will inevitably have so many welfare and environmental problems once it is scaled up?" he observed.