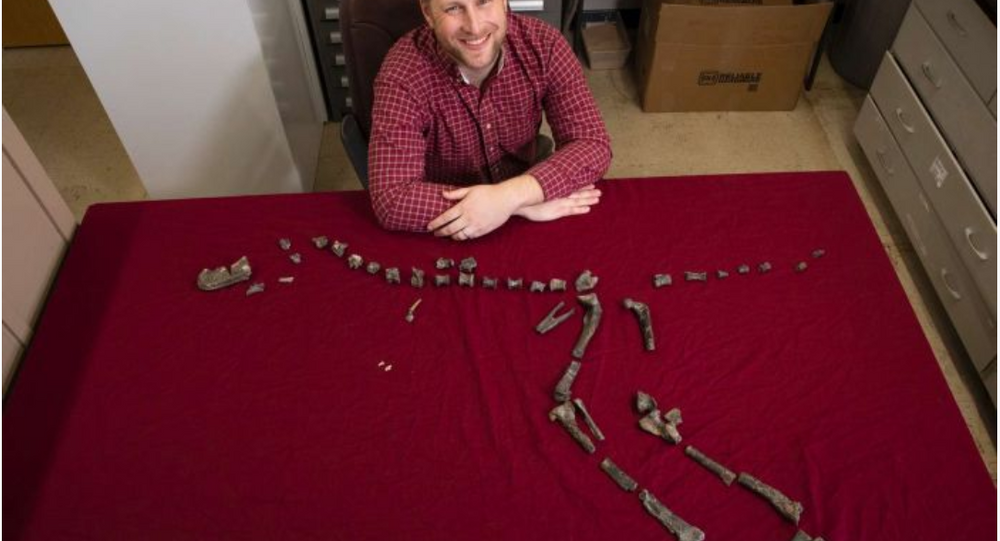 Paleontologists have identified Tyrannosaurus rex’s cousin, a previously unknown species of the tyrannosauroid dinosaur that lived during the Middle Cretaceous Period around 92 million years ago and only stood at just three feet tall.

According to a study published in the journal Nature Ecology & Evolution Monday, the T. rex relative, named Suskityrannus hazelae, was a "small-bodied species" that lived around 27 million years before the Tyrannosaurus rex. The creature's name is a combination of the Native American Zuni word for coyote, "suski," and the Latin "tyrannus," which means king. The Zuni are Native American Pueblo peoples that live by the Zuni River in western New Mexico.

​Multiple fossils of the species were discovered in 1997 by geologist Robert Denton and in 1998 by Virginia Tech Assistant Professor Sterling Nesbitt during an expedition in New Mexico's Zuni Basin. The fossils were stored in the Arizona Museum of Natural History until 2006, when Nesbitt started examining them with colleagues.

Suskityrannus was around nine to 12 feet long, which is just a little longer than the skull of an adult T. rex, and weighed less than 90 pounds. The T. rex, on the other hand, could weigh in at a gigantic nine tons. In addition, Suskityrannus' skull was a wee 12.5 inches in length, according to the researchers from multiple US and international universities.

"Essentially, we didn't know we had a cousin of tyrannosaurus rex for many years," Nesbitt told ABC News.

"Suskityrannus gives us a glimpse into the evolution of tyrannosaurs just before they take over the planet," Nesbitt noted. "It also belongs to a dinosaurian fauna that just proceeds the iconic dinosaurian faunas in the latest cretaceous that include some of the most famous dinosaurs, such as the triceratops, predators like tyrannosaurus rex, and duckbill dinosaurs like edmontosaurus."

© Photo : Cortesía de Reynaldo Vela
WATCH: 'Dinosaur Egg' That Will Save You From an Earthquake

Although the researchers are unsure what Suskityrannus ate, they suspect that the creature hunted small animals.

Although the newly identified creature provides information on the evolution of the T. rex, it would be inaccurate to call it a "missing link," Nesbitt told Gizmodo, adding that the Suskityrannus "represents a side-branch of the [tyrannosauroid] family" and is "not a direct ancestor" of massive tyrannosauroids such as T. rex and Albertosaurus.

Nesbitt did not immediately respond to Sputnik's request for information.