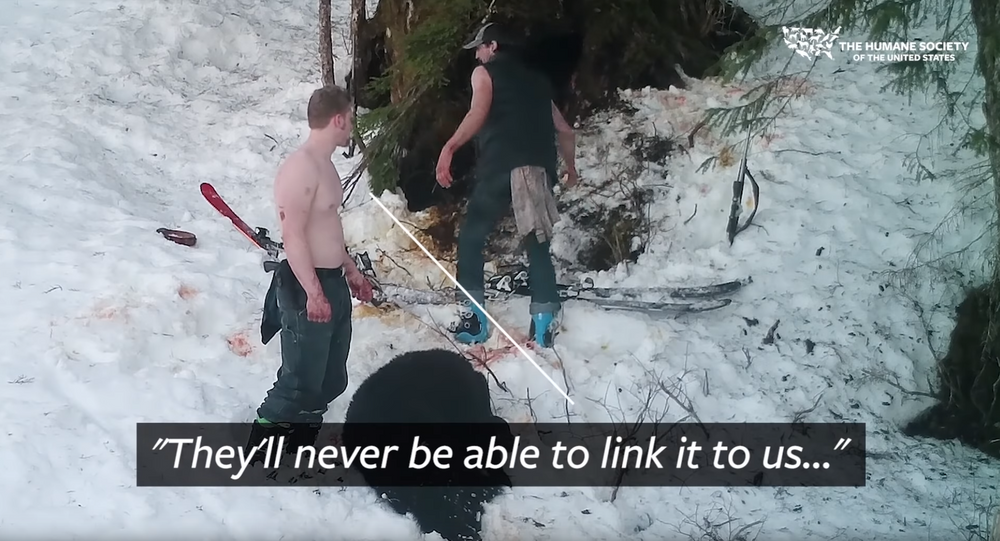 Almost a year after a now-convicted Alaskan father-son duo killed a black bear and her two cubs, the graphic video recording of their deed is now part of the public record as evidence of an ongoing environmental issue in the region.

The illegal and cowardly slaying of a black bear sow and her two cubs by 41-year-old Andrew Renner and his 18-year-old son Owen was recently addressed by an Anchorage court and resulted in hefty fines, jail time and a forfeiture of property for both.

Little needed to be said during the trial, as damning footage recorded the father and son's killing and subsequent skinning of the hibernating bears. Later footage shows them returning to the scene to collect the cubs' carcasses.

Unbeknownst to the Renners, who can be heard bragging "they'll never be able to link it to us," the three bears were part of an ongoing study with both the US Forest Service and the Alaska Department of Fish and Game (ADF&G) and, as a result, had a motion-tracking camera fixed on their den.

The father would then go on to show off his "kill" at his local ADF&G and falsify a "Black Bear Sealing Certificate," claiming to have killed the animal lawfully.

The hunting of black bears is permitted within certain guidelines, according to the ADF&G guide, but state law prohibits the "harvesting" of adult bears with their cubs, as it is deemed "hard on the population."

Per a January press release, Andrew Renner was sentenced to five months in jail with two suspended, a $20,000 fine and ordered to forfeit his boat, pickup truck, firearms and other miscellaneous items used in the crime. His son, who also forfeited a number of possessions connected to the slaying, was sentenced to suspended jail time.

Andrew Renner's hunting license was revoked for 10 years, and Owen's is invalid for the next two years.

"The defendant, and anyone else that would pursue game in our state, should be on notice that killing a sow with cubs and then poaching the cubs to cover it up will result in a significant jail term and loss of hunting privileges," Alaska's Assistant Attorney General Aaron Peterson remarked in court, stressing that this particular case was the most "egregious bear cub poaching case" his office had ever seen.

Though the Renners' sentencing concluded in January, the Humane Society of the United States led the charge in calling for the video evidence to be made public to expose a sort of lawlessness rarely caught on camera.

"Justice was served — but these animals deserve more respect and compassion," the Humane Society's ongoing call-to-action report notes, encouraging voters to contact US Acting Secretary of the Interior David Bernhardt to "oppose the rule to overturn wildlife protections."

Ban on Hunting Elephants in Botswana May Soon be Lifted - Reports