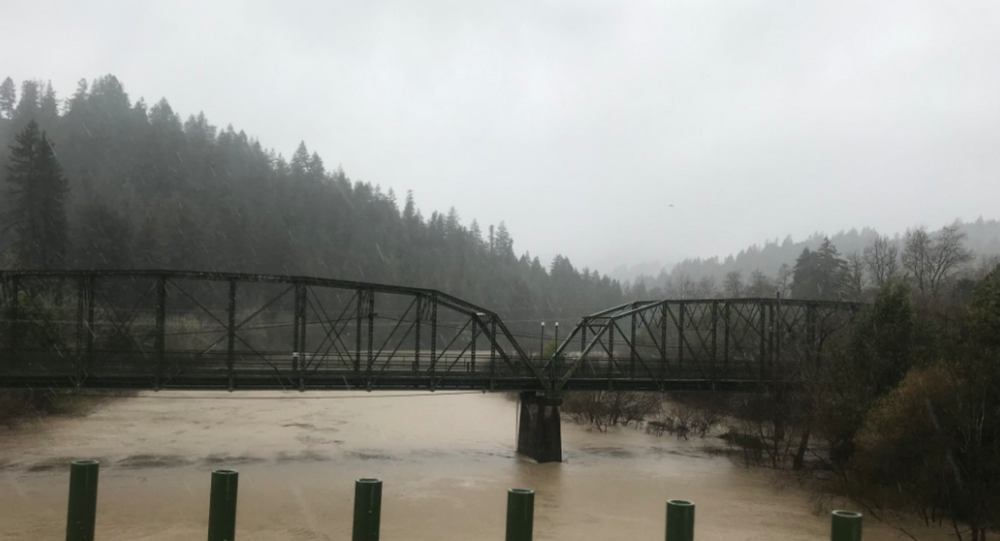 Thousands of people in Northern California evacuated their homes Tuesday amid torrential rain and heavy snow.

On Tuesday, authorities ordered evacuations in the town of Guerneville, which is about 60 miles north of San Francisco, and around two dozen other communities in northern California at risk of flooding from the Russian River, a southward-flowing river flowing through the Greater San Francisco Bay Area.

​"A slow-moving storm is moving into the West Coast from the Pacific, which has been the cause for very heavy rainfall that has occurred over northern and central California [Monday and Tuesday]," AccuWeather Senior Meteorologist Frank Strait warned earlier this week.

​"Due to flooding, all roads leading to the community are impassable. You will not be able to get into or out of town without a boat today," the office added.

​By 6 p.m. Tuesday, the Russian River had topped 32 feet, and is expected to increase to about 46 feet by Wednesday evening, according to forecasters. The record peak for the Russian River is 49.50 feet in 1986, the National Weather Service reported.

​"If it gets to 46 feet, it's done. There is no way to prepare for that," Andre Vazquez, the manager of the one-story River Inn Grill in Guerneville, recently told the the Sacramento Bee, adding that his restaurant could be completely submerged.

​A mudslide on the Bohemian Highway near Monte Rio in Sonoma County closed both directions of the highway, Monte Rio Fire Chief Steve Baxman reported Tuesday afternoon. Dozens of other mudslides were reported in Sonoma and Plumas counties Tuesday, blocking traffic on Highways 1, 116, 128 and 70, Accuweather.com reported.

​"We took 17 people out of cars and houses during the night. Too many people are driving into water," Baxman told the Press Democrat newspaper.

"Other rivers in the area are also going to see major flooding; the Navarro River is currently above flood stage and is forecast to crest at 35.4 feet at Navarro late [Tuesday]. Major flooding is considered 34 feet and above, and the record crest for this location is 40.6 feet," Strait also warned Tuesday.

​The storm is also expected to raise snow levels to 6,000 feet across the Sierra Nevada mountain range, said Hannah Chandler-Cooley, a meteorologist with the National Weather Service in Sacramento.

A large section of Interstate 80 — which runs through the Sierra Nevada — was shut down Tuesday afternoon, according to Caltrans District 3.

The National Weather Service has also issued flood warnings and flash flood watches in many parts of the Sacramento area, which are expected to last through Thursday morning.