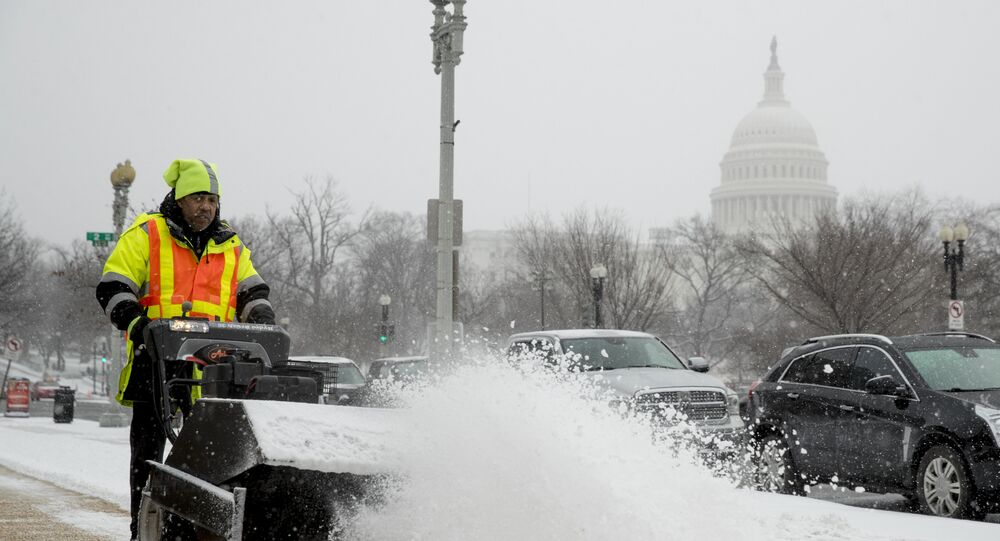 On Wednesday, a massive winter storm dumped snow and heavy rains in as many as 39 US states in the South, Midwest, Mid-Atlantic and southern New England, affecting more than 200 million people.

"A large winter storm will affect locations from the Upper Midwest to the East Coast beginning tonight," the National Weather Service (NWS) warned Tuesday. "Significant amounts of moisture will spread north and east from the Gulf of Mexico."

​The storm in northern Minnesota through Missouri and east into the Mid-Atlantic region could bring as much as six inches of snow, according to the National Weather Service. Residents in New York and southern New England will also experience freezing rain and sleet.

​"With a wintery mix expected through much of the state during this evening's commute, I encourage all drivers to take it slow and avoid the roads if possible during this winter weather event," New York Governor Andrew Cuomo said in a statement Wednesday.

"We are urging residents of New Jersey to drive with caution and use their best judgment during this time," he said in a statement Tuesday.

Pennsylvania Governor Tom Wolf also advised residents to stay home Wednesday, while the NWS warned that "travel will be very difficult" across parts of Virginia and Washington, DC, this week.

​"The combined weight of snow, sleet and freezing rain could result in downed branches and isolated power outages," the Baltimore/Washington NWS warned.

Federal offices were closed in Washington, DC, Wednesday, while schools in major cities from Minneapolis to Kansas City and east into Philadelphia and the capital were closed for the day.

​By Wednesday afternoon, around 2,600 flights had been canceled within the US and more than 2,000 delayed, according to flight-tracking website FlightAware.

​According to weather.com, Omaha, Nebraska, and Sioux Falls, South Dakota, had already accumulated five inches of snow by Wednesday.

Ice weighing down power lines in Boone County, Arkansas, knocked out power in 2,000 homes Tuesday, according to AccuWeather.

​"Some areas of Alabama and Tennessee could get six inches of rain from this system," AccuWeather senior meteorologist Alan Reppert said. "It might not stop raining until Friday."