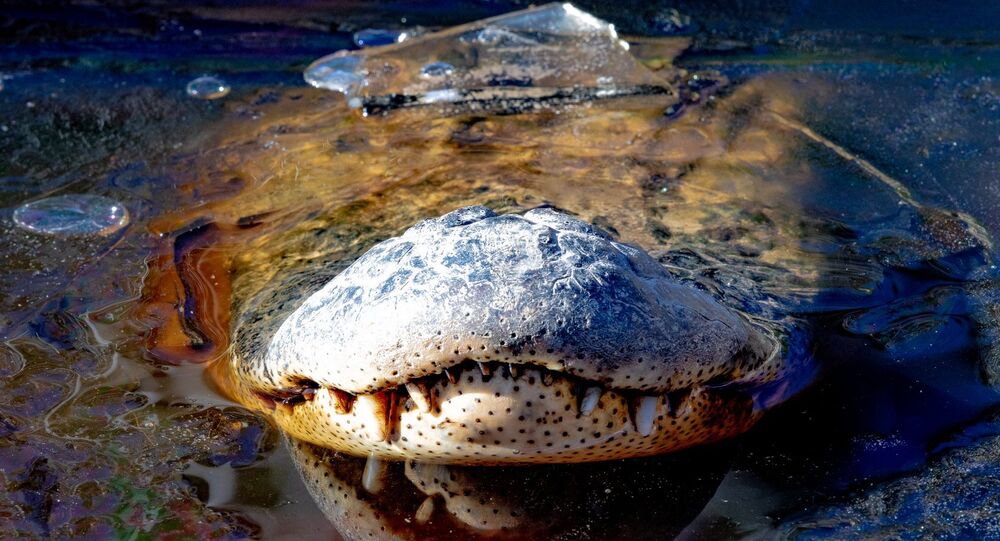 Freezing temperatures in North Carolina have triggered over a dozen cold-blooded creatures to turn to brumation, a type of temporary hibernation specific to reptiles.

On Monday, at least 18 American alligators' snouts were seen exposed and frozen within Shallotte River Swamp Park's waters, causing some to scratch their heads about the creatures' choices.

Though the sight of over a dozen gator noses is a strange spectacle to the average individual, the park, described as "North Carolina's only privately operated licensed and certified alligator and reptile rescue sanctuary," clarified that the reptiles were alive, well and using a survival mechanism known as brumation.

Brumation can last anywhere from a few hours to five months if necessary and is generally triggered by extreme temperatures, but has also been known to occur at warmer temperatures, as long as they're below 70 degrees Fahrenheit, according to South Carolina Aquarium.

"It's a survival mechanism that they do in the event they need to breathe. They stick their noses up out of the water, and if it freezes, it will freeze around their snout and still allow them to breathe," Shallotte River Swamp Park GM George Howard told Mother Nature Network following the facility's first observation of the behavior last January.

Through brumation, alligators are able to slow their metabolisms down for weeks, slowly taking in oxygen while eliminating the need for sustenance.

Howard would later tell the outlet that the Shallotte River Swamp Park gators will resume business as usual once the ice finally thaws and releases their idle bodies.

The sanctuary invites those concerned with the rescue gators to visit their Facebook page and blog to keep up with the alligators and ask any questions concerning their current state.

Too Close and Personal: US Woman Feeds 14-Foot Gator

Hilarious Reaction of a Cop Mock Charged by Scary Alligator