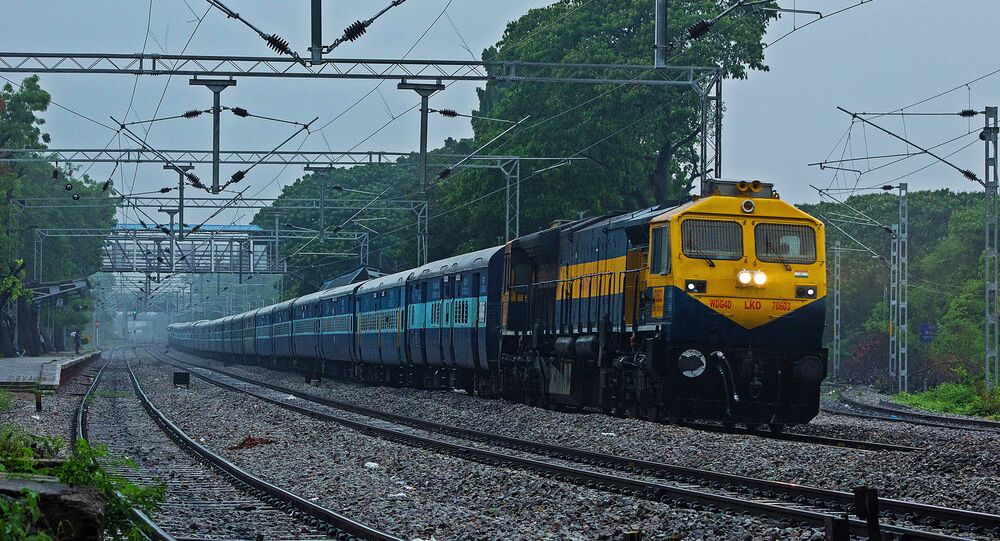 Presently, the Indian Railway is using loudspeakers playing the sound of bees buzzing to dissuade elephants from straying onto tracks. As many as 2330 elephants in India have died due to unnatural causes in the last five years, most of which have been attributed to accidents on railway tracks.

New Delhi (Sputnik): Elephants being killed by speeding trains are a common phenomenon in India. The Indian Railways has been struggling to deal with the perennial problem but have not been able to come up with an effective strategy so far. A recent innovation by a researcher of the Indian Institute of Technology (IIT), Delhi has brought a new ray of hope in the direction of saving the jumbos from being killed while crossing railway tracks.

© CC0
India Unveils Jumbo Gift for its Elephants: A Hospital
The device is designed to alert train drivers a few kilometers ahead in case a herd of elephants are anywhere close to the tracks the train is traveling on. Authorities are mulling launching the device on a pilot basis at the Rajaji National Park in the Himalayan state of Uttarakhand.

"We have indigenously developed a device for train drivers which will be linked with four kinds of sensors along the railway tracks. The sensor will send messages directly to the drivers about the movement of elephants along the tracks," Professor Subrata Kar who developed the device, as well as the sensors, told Sputnik.

India has lost nearly 2330 elephants since the last elephant census in 2012 and the major reasons for unnatural deaths of the jumbos have been identified as train accidents and electrocution. In 2012, there were around 30000 elephants in the country which come down to 27312 in 2017.

"Elephant God in Crisis. 250+ deaths already during 2018, around 20% being by electrocution. Using a simple low cost "T", as in the right, can eliminate sagging lines in their path in India's 101 elephant corridor protecting the gentle giants," Sushanta Nanda, Indian Forest Service officer serving in Odisha tweeted last week.

Elephant God in Crisis.250+ deaths already during 2018, around 20% being by electrocution. Using a simple low cost “T”, as in the right, can eliminate sagging lines in their path in India’s 101 elephant corridor protecting the gentle giants. @moefcc to pl issue guidelines soon. pic.twitter.com/QEKQXlVzx4

© CC0 / Pixabay
Elephant Kills Selfie-Snapping Tourist
On November 21, India's National Green Tribunal (NGT) asked the Ministry of Environment, Forests and Climate Change to consider declaring all elephant corridors in the country as eco-sensitive zones. The direction came in response to a petition filed by a resident of the northeastern state of Assam who contended that "Owing to the increased denudation and loss of their forest habitats, elephants have come increasingly into conflicts with humans and faced deliberate retaliatory killings and accidents at railway crossings, high tension power lines, power fences, and trenches."
...
Reddit
Google+
Blogger
Pinterest
StumbleUpon
Telegram
WhatsApp
30