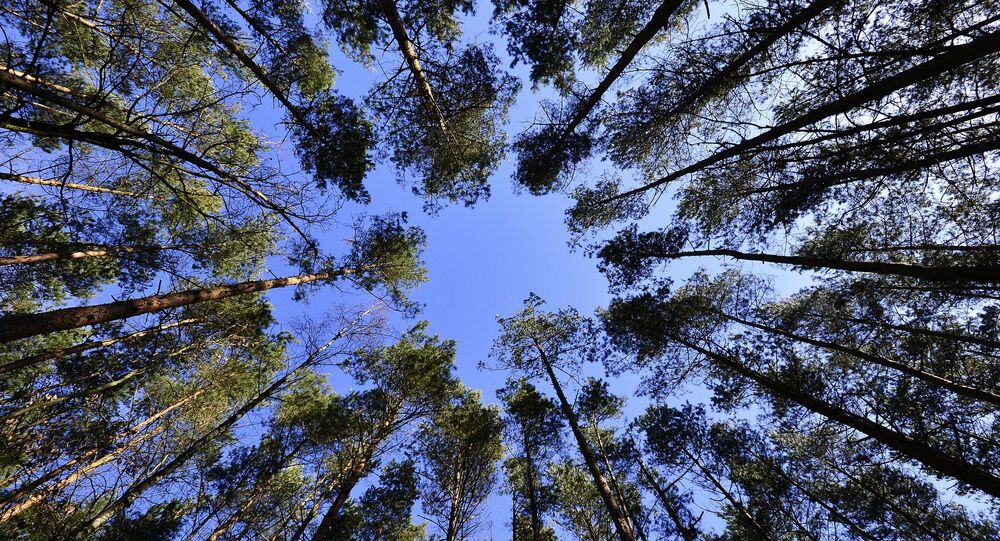 Guns to Roses: Story of India's Bhairabkunda Forest Made by Ex-Militants

Giving up their armed struggle for seceding from India to form a sovereign land for the Bodo tribe, a group of former insurgents in India’s northeast have taken up a noble cause. In a mere 10 years, they have successfully converted 2,600 hectares of barren land into a picturesque man-made forest which they aim to convert into an eco-tourism hub.

Guwahati (Sputnik), Rishikesh Kumar — A hundred kilometer drive from Guwahati, the capital city of India's north-eastern state of Assam, sits a thick kaleidoscope of green foliage formed by different species of vegetation. The forest stands out because of the uniformity in height of the rubber trees that grow resplendently straight up towards the sky, which is obscured by the branches and leaves, while the thick vegetation on the ground crawl over boulders and contour the land.

But what makes this forest that lies close to the India-Bhutan border special is its unique history. The forest is just over a decade old and was entirely man-made by a group of 35 persons who dedicated their lives to restoring the ecological balance of their homeland in Udalguri that had become a hub of man-animal conflict due to reckless deforestation.

© CC0
China Likely to Pitch for Investment in Northeast India by Partnering With Japan
The Bharaibkunda man-made forest has now brought a ray of hope in mitigating the severe 'man-elephant conflict' in the Udalguri district. In 2018 so far, 18 persons have been trampled to death by elephants that ventured into the villages in want of food. In November alone, eight such incidents occurred in the area.

The 35 persons led by Ismail Daimari belonged to an armed separatist outfit demanding a sovereign land for the Bodo tribe. After surrendering arms, instead of choosing an easy life in the relief camps run on government funding, Ismail Daimari and friends decided to negotiate with the state administration for a piece of uncultivated land on 50 years lease. The bargain was to share 50/50 in the profit from cultivation. The central government had also promised to provide financial help for the purpose. Ismail Daimari says the government's promises remain largely unfulfilled and that they were able to successfully convert the arid land into a flourishing forest with help from the people of six surrounding villages and simple traditional technologies.

Giving up their armed struggle for seceding from India to form a sovereign land for the Bodo tribe, a group of former insurgents in India’s northeast have converted over 8000 acres of barren land into a picturesque man-made forest. They have also constructed artificial canal pic.twitter.com/5tRDTAj4FU

"We started the plantations in 2007 with just 35 members who formed a joint forest management committee. We started work after seeking guidance from the forest department. We were supposed to share 50% of the income from the forest with the state. But, we later decided not to bring down the trees. We are now focussing on developing cottage industries based on forest resources for income generation," Ismail Daimari told Sputnik.

© Wikipedia / AKS.9955
India's Tribal Artisans Fighting Odds to Keep 5,000 Year Old Metal Art Alive
When one enters the forest, one will feel the abrupt change in temperature. It is hot outside the forested area, but once inside the forest, one is refreshed by the cool breeze flowing through the uniform and imposing thin trunks of rubber trees that stand close to each other like a platoon of giant soldiers. Meanwhile, a number of man-made canals that source water from small rivers running in the vicinity provide replenishment to the vegetation in the 22 acres of land that was once completely barren.

On a slow drive through the forest, one can spot clusters of houses that make up six villages. The inhabitants of these tiny villages namely — Sonaigaon, Bhairabpur, Goroimari, Sapangaon, Mazargaon-1, and Mazargaon-2, have been pitching in to provide protection to the forest which has become host to at least 2,000 species of flora and fauna.  People of each village take turns to guard the forest and to ensure that no trees are felled or animals and birds hunted. The common species include the mighty elephant, chital, mongoose, python, deer, wild boar, and all things that are slimy, crawling and nocturnal. Some leopards and flying snakes were also spotted in the forest lately. The forest is also a delight for birdwatchers, as a huge variety of migratory birds that were earlier extinct in the area have now ventured back.

© AP Photo / Ajit Solanki
700-Year-Old Indian Banyan Tree Kept Alive on Drip (VIDEO)
A forest without the usual rush of tourists makes it different. But Ismail Daimari, who heads the joint forest management committee, believes that the area can be developed as an eco-tourism hub.

"We are seeking the support of the government in turning the forest into an eco-tourism hub so that the people who toil hard day and night in maintaining and guarding the forest have a steady source of income. We have even started constructing tree houses with all the necessary amenities for tourists. There is no electricity in this area, so we have installed solar panels for lighting. A little help from the state government would go a long way in realizing this plan," Ismail Daimari told Sputnik.

The forest has already gained popularity as an excursion spot. So far, students from the University of Delhi and enthusiasts from 13 countries have visited the forest to have a look at the miracle created without fancy equipment or deep scientific research.

Meanwhile, a faction of the NDFB that had opposed the 2005 peace accord with the government continues to indulge in militancy and has been blamed by the government for many instances of ethnic violence that has occurred in Assam since 2014. The NDFC claims to represent the Bodo tribe that form 10% of Assam's population. The main grievances of the group are the under-development in the region and the influx of immigrants. It aims to address these issues by seceding from India and establishing a sovereign Bodoland.