An international team of researchers has verified the presence of a huge 31 kilometres (19 miles) wide meteor crater beneath a half-mile layer of ice in Greenland, underneath Hiawatha Glacier.

The discovery has been in the making since 2015 after lead study author Kurt Kjær, a geochemist at the University of Copenhagen, found a weird depression under the glacier in maps made by NASA’s Operation IceBridge. The depression turned out to be an impact mark of a mile-long iron asteroid, which had crashed into the earth with a power of 700 one-megaton nuclear bombs like the one dropped on Hiroshima in 1945, Vice Motherboard reported.

NASA said in a press release on Wednesday that its own research team will now attempt to determine when the impact occurred and how the collision affected Earth.

“The crater — the first of any size found under the Greenland ice sheet — is one of the 25 largest impact craters on Earth, measuring roughly 1,000 feet deep and more than 19 miles in diameter,” the release said. 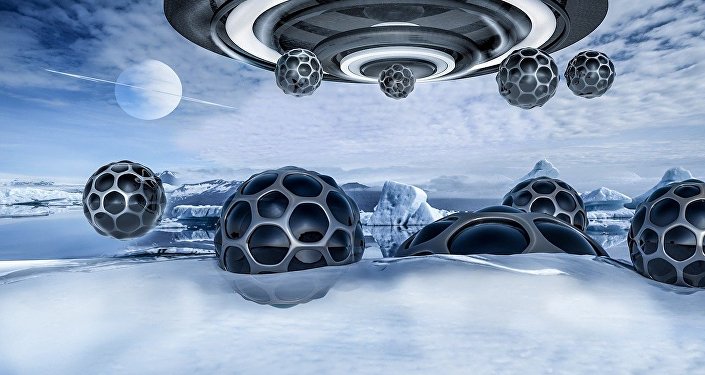 © CC0
Probe Launched After Several Pilots Report Light Speed UFO Sightings in Irish Sky
The team, which included a NASA glaciologist and was led by researchers from the University of Copenhagen’s Centre for GeoGenetics at the Natural History Museum of Denmark worked for the past three years to verify the discovery, which they initially made in 2015 using NASA data.

“You have to go back 40 million years to find a crater of the same size, so this is a rare, rare occurrence in Earth’s history,” said Kjær, cited by Guardian.

Searching for the impact point took researchers flew out to the glacier and collected sediments that had washed from the crater on to a nearby floodplain. They had also used Alfred Wegener Institute's powerful ice-penetrating radar system that was operated from the air back in 2016 to determine the concrete place of the crater.

The discovery might provide answers to the reasons for sudden climate changes in Earth’s history, like what was the catalyst of the Younger Dryas, a period of sudden global cooling in the Northern Hemisphere from 12,800 to 11,700 years ago. A 2007 study suggested that an asteroid impact might have caused ecological disarray at that time, wiping out megafauna species like mammoths.

The team of researchers is yet to discover if the crater is related to Younger Dryas, in any way. Still, the finding can be useful for understanding the geochronology and climate change studies.

“This study suggests several avenues for further research into both the nature and age of the Hiawatha impact crater and other possible subglacial impact craters,” the authors concluded in the study published in the November 14 issue of the journal “Science Advances”.