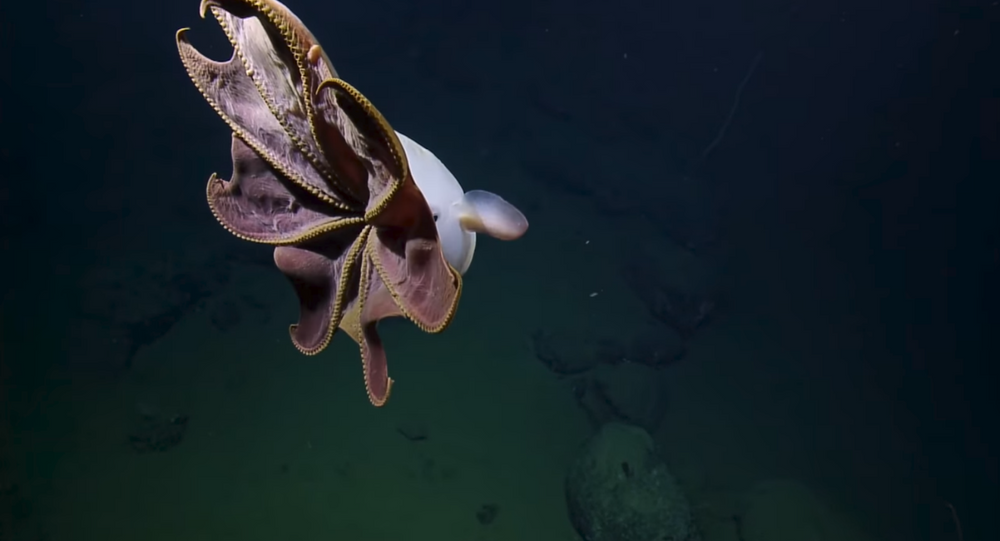 Marine scientists exploring the Davidson Seamount, an underwater mountain habitat located some 80 miles off the coast of Monterey, California, were given the surprise of a lifetime last week when they came across the rarely spotted Grimpoteuthis - aka the dumbo octopus.

Researchers were checking out a previously unexplored reef near the southwest portion of the seamount via Hercules, their remote-operated underwater vehicle, when the white octopus decided to make its grand appearance to officials on board the E/V Nautilus research vessel.

Footage of the encounter was shared on the EVNautilus YouTube page on October 23. "At first this ghostly octopus drifted past the camera on ROV Hercules flapping wing-like fins, then inverted its webbed arms, ballooning out to reveal eight rows of suckers," the video's caption states.

​The two-and-a-half-minute recording shows the majestic octopus giving a performance, flapping its wings and showing off its mantle as it transits the seafloor of the Pacific Ocean.

Although the cephalopod was given the name ‘dumbo octopus' as a result of the large fins on the side of its head, the term itself refers to an entire genus of deep-sea umbrella octopi, according to the Tech Times. Said genus contains 15 different species.

"It's so cute," one researcher is heard saying as ROV Hercules moves closer in on the subject. "Showing off here, you're gonna be famous."

"Oh my gosh, he's posing. This is great! Showoff," they added.

Though most dumbo octopuses range between 20 to 30 centimeters long, researchers estimated that their recent specimen came in at a whopping 60 centimeters.

Considering that the dumbo octopus lives at extreme depths that range between 9,000 and 13,000 feet, they are a rare find for researchers. "It's very exciting to one live. It's something you don't come across the every day," Chad King, the chief scientist aboard the Nautilus vessel, told National Geographic.

The Nautilus team spent just a few minutes trailing the octopus before parting ways and continuing on with its survey of the Davidson Seamount. During the Tuesday dive, researchers also found fields of corals and sponges that appeared lifted from a Dr. Seuss book, according to King.

In 2009, the Davidson Seamount was added to the Monterey Bay National Marine Sanctuary after the underwater mountain was characterized as an "undersea oasis" in an ecological survey carried out by the Monterey Bay Aquarium Research Institute and National Oceanic and Atmospheric Administration.

A Diver for Dinner: Furious Octopus Tries to Catch and Eat Unexpected Guest