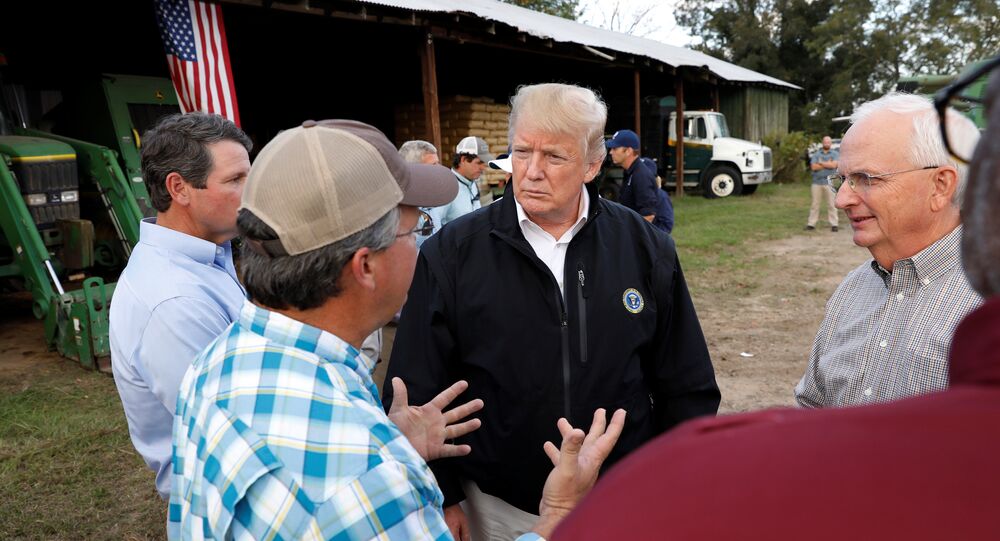 US President Donald Trump praised the federal response to Hurricane Michael during his visit to Florida and Georgia Monday to evaluate the damage caused by the storm, which rampaged through parts of Florida, Georgia, North Carolina and Virginia last week, ruining coastal cities and killing 19 people.

Trump, along with First Lady Melania Trump, arrived Monday at Eglin Air Force Base in Okaloosa County, Florida, where they were greeted by Florida Governor Rick Scott and Federal Emergency Management Agency (FEMA) Administrator William "Brock" Long, among others.

​"Rick Scott, your governor, has done an incredible job, and all of your people have been amazing — working with FEMA, working with the first responders, and always law enforcement," Trump said Monday before boarding a helicopter for an aerial tour from Marine One over areas destroyed by the storm.

​Many homes in the Florida Panhandle, in particular in the seaside town of Mexico Beach, were wiped out by the storm's punishing 155 miles per hour winds.

"Some of them have no trace of a home. You wouldn't even know it," Trump noted, also stating that the government's prime concern was to provide food, power and safety to those affected by the storm.

Hurricane Michael claimed the lives of at least 19 people, while dozens more remain missing. On Thursday night, one person died in North Caroline state when a tree fell onto his vehicle, North Carolina Governor Roy Cooper said at a news conference. In the state of Georgia, Travis Brooks, Emergency Management Agency Director of Seminole County, confirmed that an 11-year-old died when a tree crashed into her house, local media reported. Thousands of residents in the affected areas still lack electricity.

​"Hard to believe. I've seen pictures, but it's hard to believe, when you're above it in a plane and to see the total devastation. You see no houses left. Not even the pads are left. It's incredible," Trump said as he walked through a neighborhood in Lynn Haven, Florida, Monday.

"To see this personally is very, very tough," he said.

"We are doing more than anybody would have ever done," the president commented. "And probably, there hasn't been hits like this, not very often — they say 50 years there was one that had this kind of power. Fifty years, that's a long time."

The US Air Force has also confirmed that an unknown number of aircraft, including some of its F-22 Raptor stealth fighters, were damaged when the hurricane mauled Tyndall Air Force Base in Florida last week. Each F-22 cost the government about $339 million to develop and acquire.

​Since Thursday, 17,000 utility workers, 18,000 search-and-rescue personnel and 4,000 Florida National Guard troops have arrived in Florida to rebuild the infrastructure and locate missing persons.

​Trump met with a group of pecan, cotton and soybean farmers at Charlie Stewart Farms, a soybean farm in Macon, Georgia, Monday evening. The US leader told the farmers over several conversations that his administration was collaborating with local and state officials to support them.